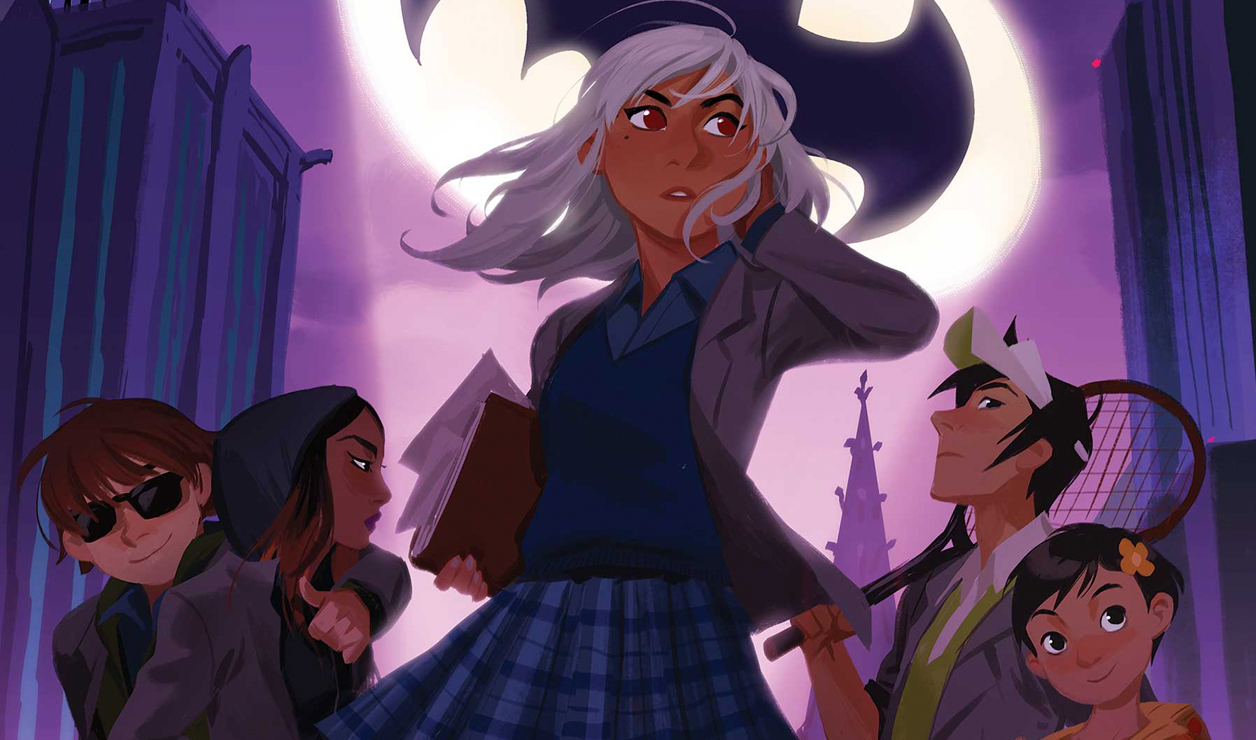 Gotham Academy is finally here! There has been a lot of hype surrounding this book, with a lot of pundits claiming that this is DC’s first foray into an alternative title. Something that’s meant to appeal to the casual reader, something meant to bring in new fans into the comic world. Think of it as DC’s attempt to matching Marvel’s Ms. Marvel, which has found great success outside of the normal comic book reading circles. All you need to do is flip through Gotham Academy and you’ll immediately get a sense that this is something different. Unfortunately different doesn’t always mean better and Gotham Academy falls into that category.

Artist Becky Cloonan has shifted to writing duties on Gotham Academy, one that she shares with Brenden Fletcher. Handling the art chores is Karl Kerschl, and it became quickly apparent that Kerschl’s art would set the tone for the series. It could be argued that the art sets the title more apart from other DC titles than the story itself. Right off the bat you’ll notice the rich, yet dark, colors that bring every panel to life.  The cartoony character designs are perfect for the characters that populate the book. Even the layouts look great, from the cutaway that establishes the school grounds to the bell tower, as the characters make their way through the cork screw staircase.

The biggest gripe with the issue is the story, which felt like another after-school special. Cloonan and Fletcher introduce us to Olive Silverlock and “Maps” Mizoguchi, students at the Gotham Academy. Olive is a returning student while Maps is a Freshman, who’s been assigned to follow Olive on their first day of school. Olive knows the ropes, and has pre-existing perceptions, while Maps is wide-eyed and bushy tailed. The two girls are already familiar with each other, with Olive being the ex-girlfriend of Maps’ older brother Kyle. Who are these girls? What relation do they have to the Bat-universe? We’ll soon find out.

Speaking of the girls. Olive Silverlock, who literally has silver locks of hair, and Maps Mizoguchi, who is always drawing maps and is into games like Dungeons & Dragons. I’m not sure if they could get any more literal in naming their characters. Ah yes, Headmaster Hammer. Referred to as Hammer Head. It’s things like this which detract from the story. It’s almost as if they’re making the characters into a parody of themselves. Or perhaps they’re trying to portray a cutesy feel that will draw in casual readers who may otherwise never pick up a comic book. Either way, it’s a gimmick.

Another issue that felt off was the pacing of the story. It felt slow at times and didn’t move the story forward much. We’re introduced to the characters in quick order, then not much happens until the end of the issue. It took the activation of the bat signal to move the girls, and the story, into action. And once it began it was over before you knew it. Rather disappointing really. Yet it’s apparent that mystery and some fantasy will soon bestow the Gotham Academy. Hopefully the story picks up.

There was one thing that bordered on the absurd, the use of candles througout the school. It’s clear that the title takes place in modern day Gotham, and Bruce Wayne is a benefactor of the school, yet the school seemed to have been illuminated by candles spread throughout it. Maybe this was meant to convey a sense of mystery and gloom, but it looked odd and entirely out of place.

Perhaps expectations were set too high, but Gotham Academy didn’t live up to the hype. Excellent artwork will only get you so far. For many comics it’s been the story that has carried the book, going into the second issue it will be the reverse for me. Barring an absolutely travesty I’m always willing to give a series a few issues to find its footing. I’m hoping Cloonan and Fletcher can do it here because it has the potential to be DC’s version of Ms. Marvel, a series that I love. I just refuse to stick around that long. DC has the potential to reach an entirely new audience with this book, let’s hope the don’t let that slip through their hands.