It’s important to preface this by saying that I’m a big fan of the Xbox 360 and its predecessor. When it comes to gaming, the 360 is my console of choice. Yes, I own the PS3 and a Wii U so I’m very familiar with the competition, but for me it was always the 360 first and foremost. Well, yesterday Microsoft had their big unveiling of their newest console. It was streamed live over the internet, via Xbox Live and on Spike TV. Held in a specially erected set on the Microsoft campus in Redmond, Washington, it was clear that that Microsoft was going all out for the event. Would it be successful, or would they pull a Sony and only give teases of a new console without actually showing the thing? To be honest, part of me wishes they didn’t unveil the new console. Why? Well it’s ugly for one.

Yes, I said it, it’s ugly. Microsoft unveiled the Xbox One, a big black box. And I do mean big. It reminds me of the VCR’s from the late 80’s or early 90’s. I did hear one person say that it reminded them of the TiVo’s, which after giving it a good staring at, I can definitely see. The Xbox One looks like a rectangular black box, and nothing like a gaming console. Yet I understand why they’ve taken this approach. For Microsoft, the Xbox has become more than just a gaming console. It’s evolved into a home theater device of sorts. When Microsoft redesigned the Xbox Live (XBL) it added the capability for the console to play media apps designed for watching movies, tv or listening to music. Your Xbox has the ability to stream movies from Netflix, Cracked, Vudu, and many more as well as tv shows from Hulu, Amazon Prime, the CW, Fox and more.

The Xbox was starting its shift towards the centerpiece of the living room. Microsoft wanted people to do much more than just play games on their Xbox, they wanted their television viewing experience to revolve around the Xbox and with the Xbox One they’re taking it a step farther. Live television has become and integral part of the new Xbox experience. The new Xbox will utilize a few different methods to deliver live TV to its users. Chief among those is HDMI pass-through, in which a cable or satellite box connects directly to the Xbox One, which then passes the signal to the television via an HDMI-out port. The direct line to your TV, through the Xbox, will allows users to watch TV with varying degrees of Xbox overlay.

You’ll be able to use Xbox’s electronic programming guide (second picture in the slideshow below), which presents a lineup based on your favorite channels or tells you what your friends are watching and can be controlled via voice, gesture, and game controller. Microsoft has even integrated the Xbox SmartGlass into the viewing experience, allowing for the second-screen functionality and even making your smartphone or tablet into a remote control. With the deep Kinect integration into the Xbox One, Microsoft has made it even easier to watch TV. Gone are the days of needing to remember what channel number ESPN is, or where to find FX. All you need to do is say “Xbox, watch ESPN” or “Xbox, watch Archer,” and you’re there. If the show isn’t on, a global search will collate all of your options for watching it, from on-demand to streaming services. 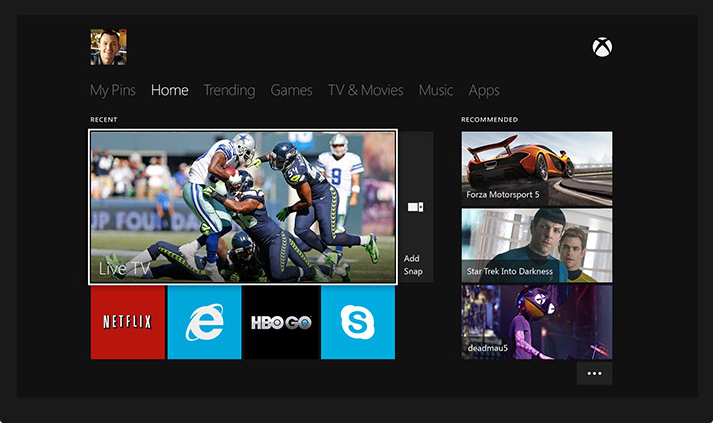 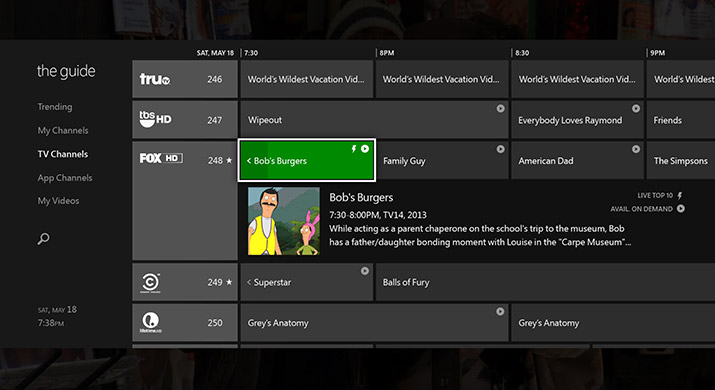 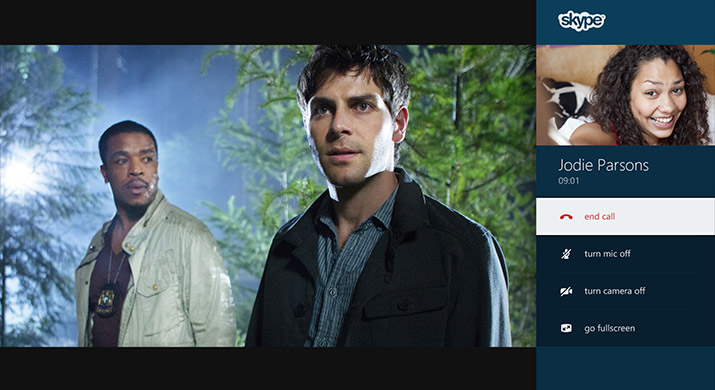 Speaking of Live TV, Microsoft also announced that Steve Spielberg has teamed up with 343 Industries to launch a live action Halo series that will be broadcast over XBL. Further details about Spielberg’s role in the new series weren’t revealed, but the director has been trying to bring Halo to the big screen for some time now, so it’s probably safe to say the universe of Master Chief is in good hands. Another entertainment feature revealed was Microsoft’s partnership with the NFL. The new partnership will see America’s most popular pro sports league bring original content to the Xbox. There was plenty of talk about being able to integrate sports scores, play-by-play views, socialization, and more into the TV screen as well as making fantasy football leagues more centralized to your experience. It’s clear that Microsoft has made television a large focus on its living room strategy.

Before we move onto the reason most gamers tuned in, for the games, I want to point out one feature that I thought was fantastic. It’s Switch feature. If you’re playing a game, but want to check in on what’s happening during your favorite baseball teams run in the 9th inning you can simply tell the Xbox to switch to live TV and it will automatically pause your game and switch to live TV. You don’t have to press anything, you don’t have to worry about pausing the game or if you’re going to lose your save. The system will do everything for you. Once you’ve satisfied your TV viewing simply say “Xbox, switch to game” and bam, you’re back playing the game, instantly. It really is a nice feature that will surely come in handy.

Let’s talk about the games because for gamers that’s what matters most. After all, this was an Xbox presentation. As soon as Microsoft announced the specs for the new Xbox One an audible groan must have gone up around the world. Gone is the PowerPC processor that drives the Xbox 360, instead Microsoft is using a Microsoft touts an AMD custom-built 8-core CPU. The memory has been upgraded from the current 512MB found in the 360 to 8GB of DDR3. A new 500GB hard drive was designed in-house and it features a blu-ray optical drive. For the tech geeks out there, the Xbox One features a single 40-nanometer chip contains both the CPU and GPU rather than the two dedicated 90-nm chips needed in the 360. It also utilizes the new USB 3.0 as well as 802.11n WiFi and WiFi Direct, which is how the new Xbox controller will connect to the system.

What does all of this mean? Well Microsoft didn’t confirm it, nor deny it, but gone is backwards compatibility. That means you’re going to want to keep  your 360 around if you want to continue playing those games, as well as all the Xbox Live Arcade (XBLA) games you’ve downloaded. Hopefully Microsoft will allow developers to update the XBLA games to run on the Xbox One and allow them to be redownloaded onto the new console. As someone who has many XBLA games, the last thing I want is to keep the 360 hooked up to my TV. 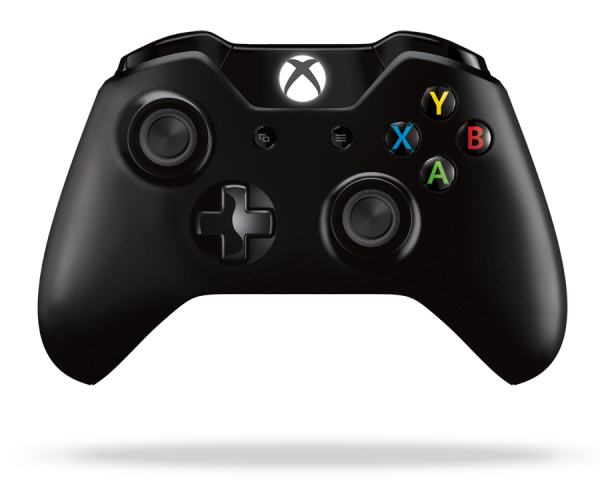 I’ve always been a fan of the Xbox 360’s controller, personally I think it’s the best gaming controller ever released with a console so it was nice to see that there were no radical changes to its design. But the controller has received some cosmetic changes to its exterior, adding a more precise joystick and D-pad. Microsoft claims that there are over 40 features which have been improved or are brand new.

There’s the addition of intricate rumble motors on the triggers, which are now called “dynamic impulse triggers”. The tech has changed from a mechanical linkage to a magnetic sensor, so developers are now able to register even the slightest touch, bringing more analogue depth to the squeezing action. The thumb sticks are smaller in diameter and the outside rim is textured so you have a better grip. Word is that they also require 25% less force to move them, making for more fluidity of movement. It’s also been reported that the edges have been better contoured to fit a wider variety of hand sizes. Lastly, the once removable battery is now fully integrated into the controller instead of being removable like in the 360. Microsoft has indicated that the old controllers will not work on the Xbox One, this is because the new controllers connect to the console via WiFi Direct.

Now, let’s talk about the games. Unfortunately Microsoft felt that the upcoming E3 would be a better forum to discuss the games for the Xbox One, which really does make sense. Instead, they revealed just a few games that we could expect on the new console. The first, which ships on release day is Microsoft’s answer to the Gran Turismo franchise, Forza Motorsports. Forza Motorsports 5 will be released, and based on the trailer they unveiled it looks outstanding. From the little thing, like paint peeling, to the sheen of the tire spray and more, it looks like Forza 5 will be a hit for Microsoft. Take a look at the trailer below. 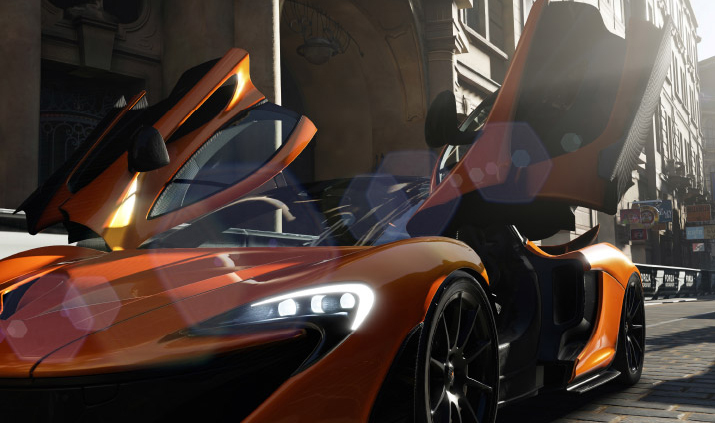 Then there’s perhaps one of the most recognizable and profitable franchises in the history of gaming, the EA Sports games. From FIFA 14 to Madden 14, and even the return of NBA Live. EA looks to be coming to the Xbox One in a big way. If the trailer they released is any indication of what we can expect, it will be exciting. And to think, these games are being released at the beginning of the consoles life cycle. Imagine what they can do a few years down the round. Personally, I’m looking forward to FIFA 14 and possibly the UFC game. While NHL 14 wasn’t previewed in the trailer, EA did mention that the NHL franchise will be on the Xbox One, but probably next year.

Then there’s the game so many fans have been salivating over, Call of Duty: Ghosts. Activision’s CEO made an appearance and show a behind the scenes video, as well as the premier trailer for their new game. The behind the scenes video was a great glimpse of what the new system will be able to do. The rendering of characters looks amazing compared to the older systems. This might be the first Call of Duty game I will buy since Modern Warfare 2. Activision also announced that DLC for the CoD: Ghosts game will be released on the Xbox One first, like the current system is for the 360.

Throughout the day other companies had been releasing statements about games that will be released on the Xbox One, from Bungie’s Destiny to Assassin’s Creed IV: Black Flag, which will be released on launch day. We also learned that Battlefield 4, Ryse, Theif and Watch Dogs are all currently in development on the Xbox One. I’m sure we’ll learn of even more games come E3, which is just weeks away.

I’d be remiss if I didn’t talk about the controversy over used games on the new console. At first an article in Wired magazine stated that people would not be able to purchase used games on the console because of a feature that ties games to a users profile. Microsoft quickly reached out to Wired to correct the story, according to them you will be able to buy and sell used games for the Xbox One. The same report stated that users would have to pay a fee to play a game that is lent to a friend, or borrowed. Microsoft came out on Twitter and denied any such fee. For now I’m going to take a wait and see approach, since there’s no release date for the Xbox One yet I wouldn’t be surprised if something changed from now to then. Instead of getting caught up in the hysteria I think it’s best to just sit back and wait.

Ultimately though, Microsoft has made a console that I will surely be buying. My biggest gripe is that there’s no backwards compatibility, and with the XBLA games I hope it’s something that they can fix. Well, to be honest I think the console itself is ugly, but that won’t matter when I’m playing the games I want to play. Will the Xbox One be a hit for Microsoft like the 360 has been? Only time will tell, but I think Microsoft will continue to lead the pack.