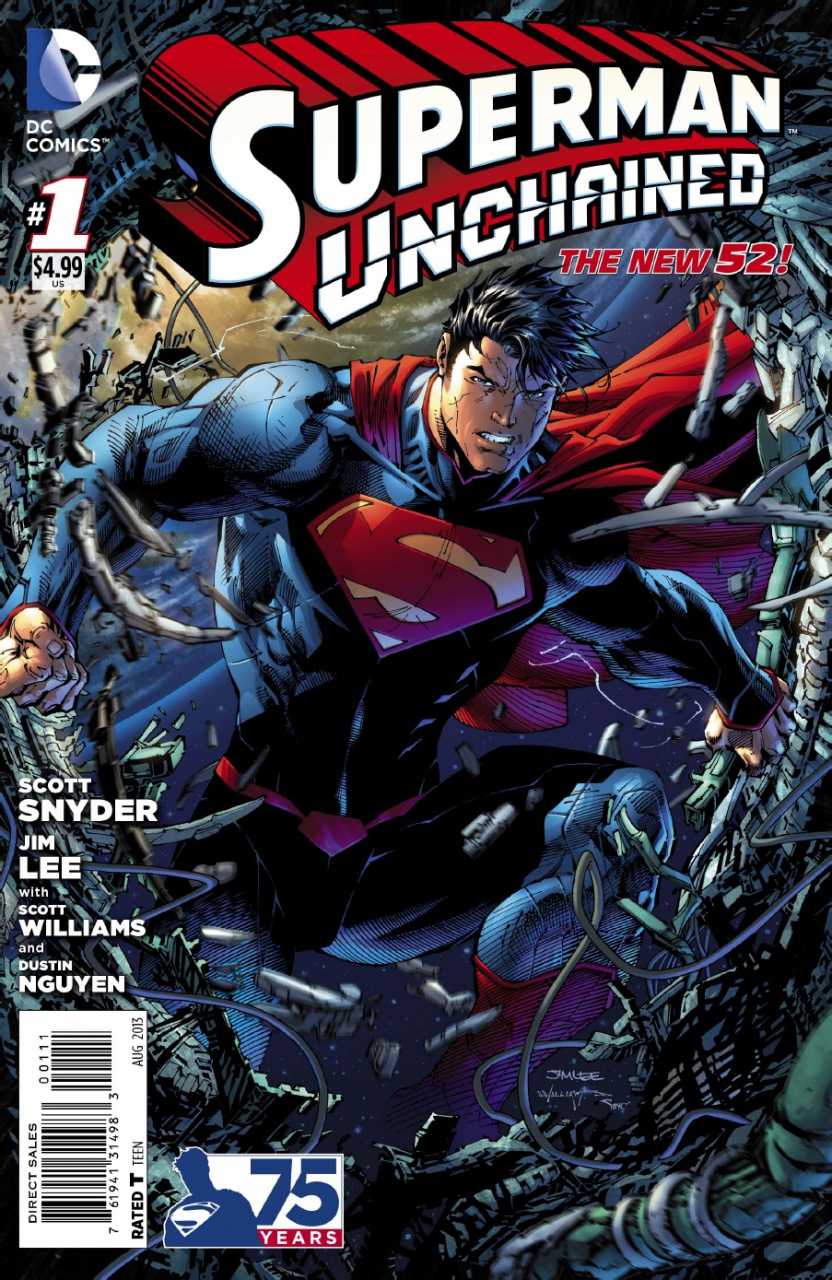 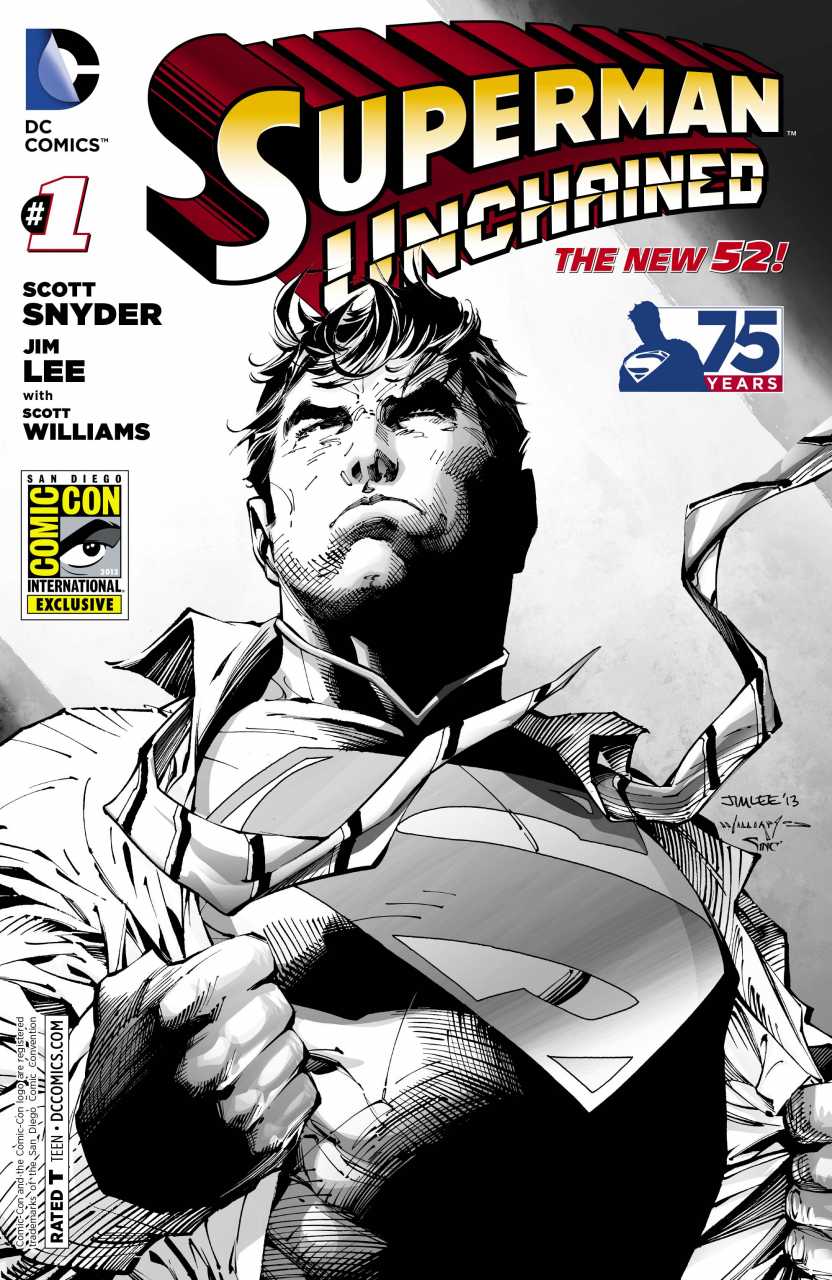 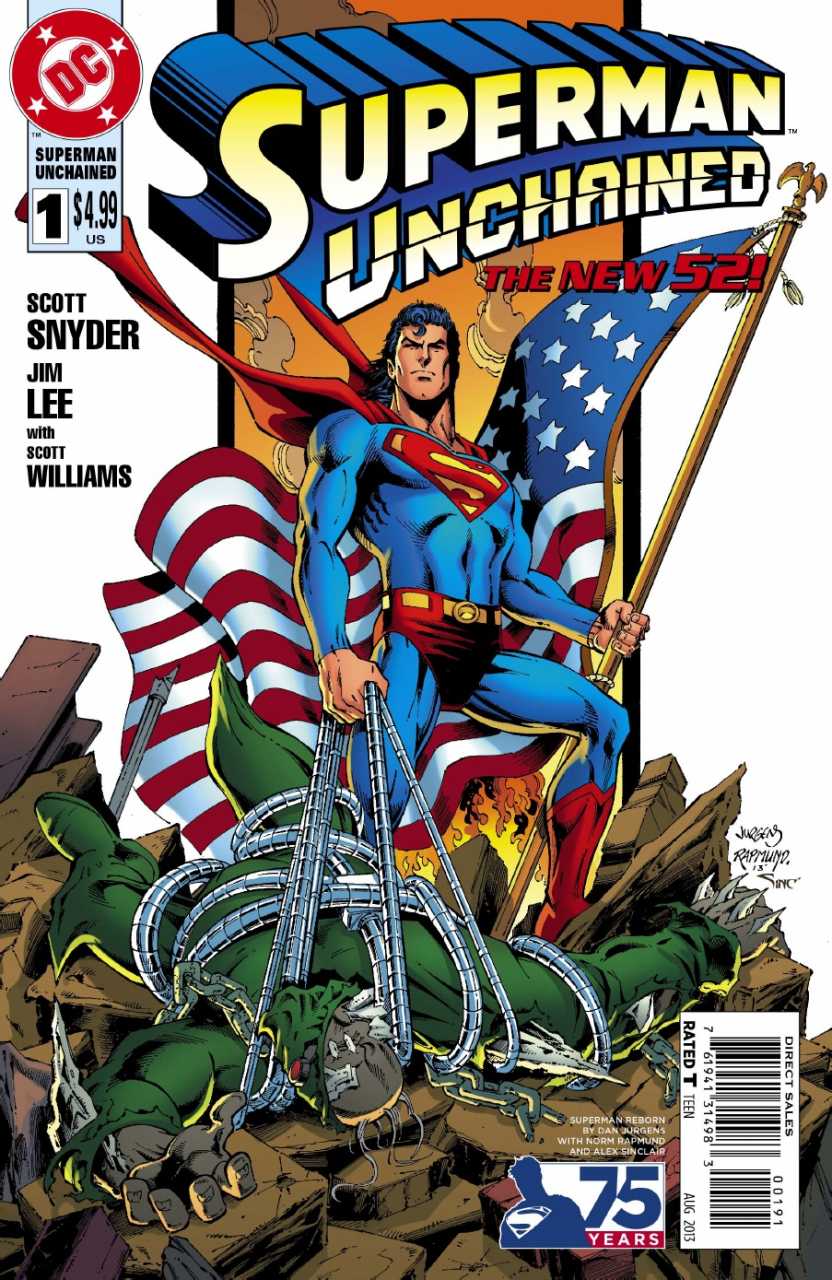 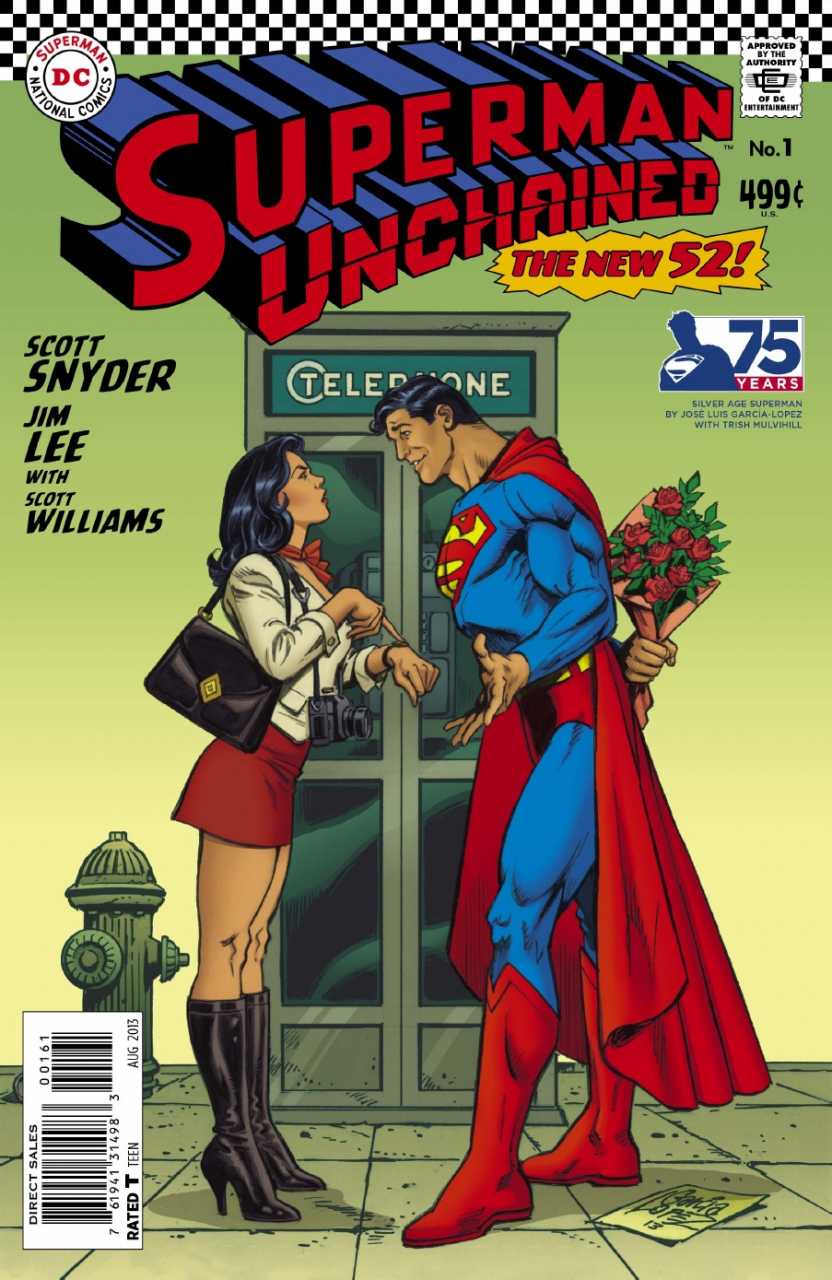 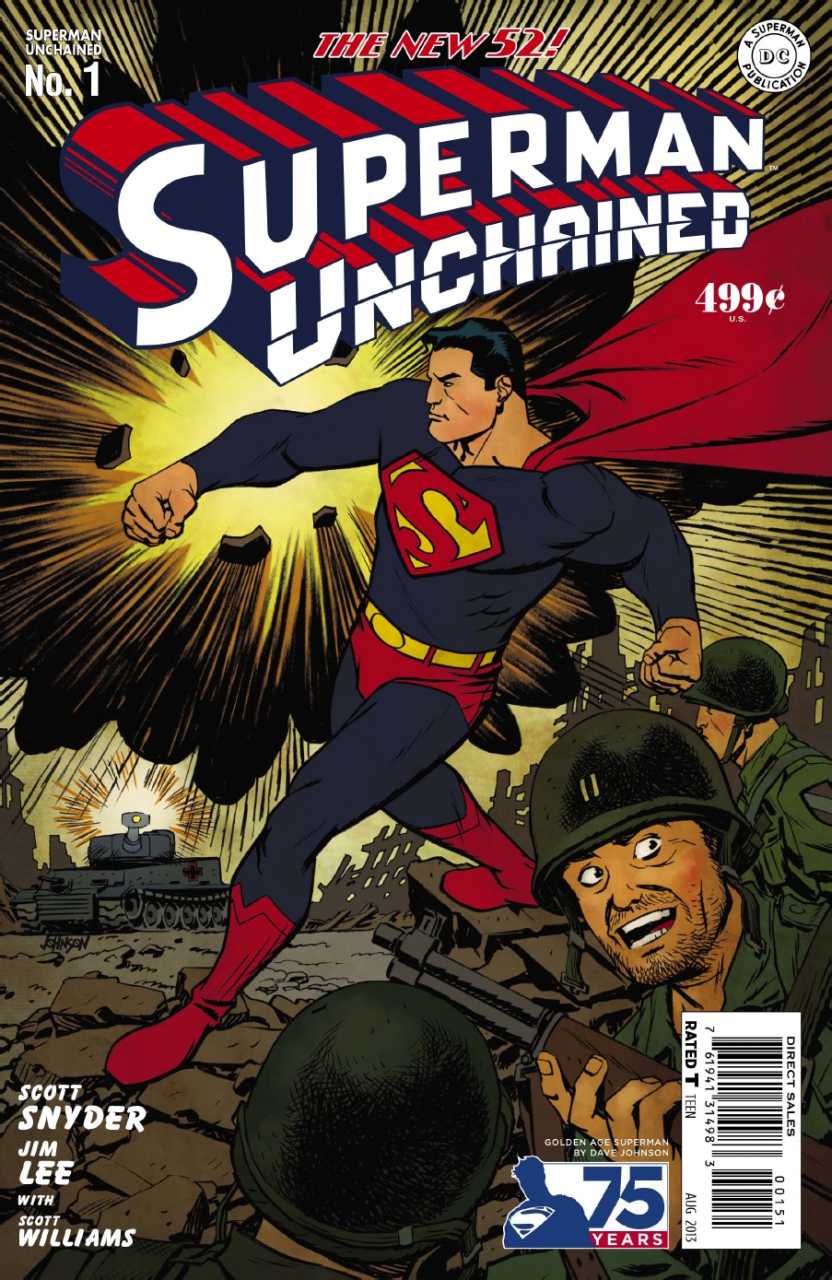 This is a big week for DC Comics and Superman, The Man of Steel movie is going to be released and the new ongoing series Superman Unchained was just released. What better way to promote the movie than by launching a new series from acclaimed writer Scott Snyder and superstar artist Jim Lee. Two of the biggest names at DC Comics teaming up to launch a new series that revolves around the most recognizable comic book character in the world. It’s easy to say that this is going to be a massive hit, but is it worth the title of roaring success?

If you’re going to judge it solely by the story, then yes it is a success. But if you’re going to judge it by the whole, by the story, and the artwork, and the terrible gimmicks then you have to ask yourself why. Why would DC do something like this? And the this that I’m talking about is their terrible fold out gimmick. Apparently, someone at DC thought that it would be a good idea to include fold out pages for the launch of Superman Unchained. These pages open up to about four times the size of a regular page, and they aren’t the easiest to unfold and fold. To make matters worse the two fold out pages are nothing more than posters basically. One his Superman breaking through a space station and the other is a classic action pose. Sure they contain some of Snyder’s excellent writing, but it feels like a cheap ploy by DC.

It’s a shame too, because the story engaging for the most part. The book opens on August 9th, 1945  in Nagasaki, Japan, the day that the United States dropped the atomic bomb on the city, and essentially ending World War II. We get the glimpse of a boy looking into the sky and watching the Bockscar drop the bomb on Nagasaki, but what starts out as a bomb opens up to reveal something very different. It seems that the U.S. was using a person with superhuman powers as the bomb, and not an actual atomic weapon.

Fast forward to the present day and someone is causing some of the biggest satellites and space stations to enter the Earth’s atmosphere. It’s as if it’s being done on purpose, and luckily Superman is there to stop them all, and rescue a couple astronauts along the way. Luckily for Clark Kent, he’s at the scene and manages to interview one of the astronauts for his human interest piece for the Clarion, the newspaper he now writes for. Jimmy Olsen and Lois Lane are still in his life, but they’re still working for the Daily Planet. And good old Lois is still harassing Clark over his writing. Some things will never change.

Scott Snyder has quickly risen to the top of  DC’s stable of writers, from his current work on Batman to his creator owned series like American Vampire, The Wake, and Severed. Snyder has gained a reputation for  a style of writing that keeps people engaged and wanting more. His writing makes you believe that there could be a man that dresses in a bat costume and chases people named the Joker or the Riddler, so seeing what he could do with Superman was exciting. Thankfully he managed to pull it off quite nicely. The writing is crisp, clean and sharp. He doesn’t muddle it up and make it feel like it’s a chore to read. Best of all he manages to write a story that you want to continue reading. Snyder is the shining star on this book. But wait, isn’t Jim Lee doing the art? Yes… he is.

Then there’s the art, I used to be a huge fan of Jim Lee, but lately his art hasn’t cut it for me. It’s felt rushed and at times sloppy. Unfortunately it looks the same to me inSuperman Unchained. To say that I’m not impressed would be an understatement. Perhaps it’s Scott Williams inks that take it down a notch, but the artwork just doesn’t feel like it’s Lee’s best work. It’s a major disappointment for me since I was hoping that the art would be as good as the story.

Overall, Superman Unchained is off to a good start. I think it could have been off to a great start had the artwork been better. For something so big, with such high hopes, it feels like a bit of a let down.  Still, it won’t stop me from continuing with the series. Synder’s writing more than makes up for it. I look forward to seeing where the book will go, and imagine that it will have a bright future. Fans of the Superman books will definitely want to pick this up, and it’s a great starting point for new readers. It’s safe to say that DC has a hit on their hands, and that seems to be the case anytime Scott Snyder’s name is on the cover, and rightfully so.