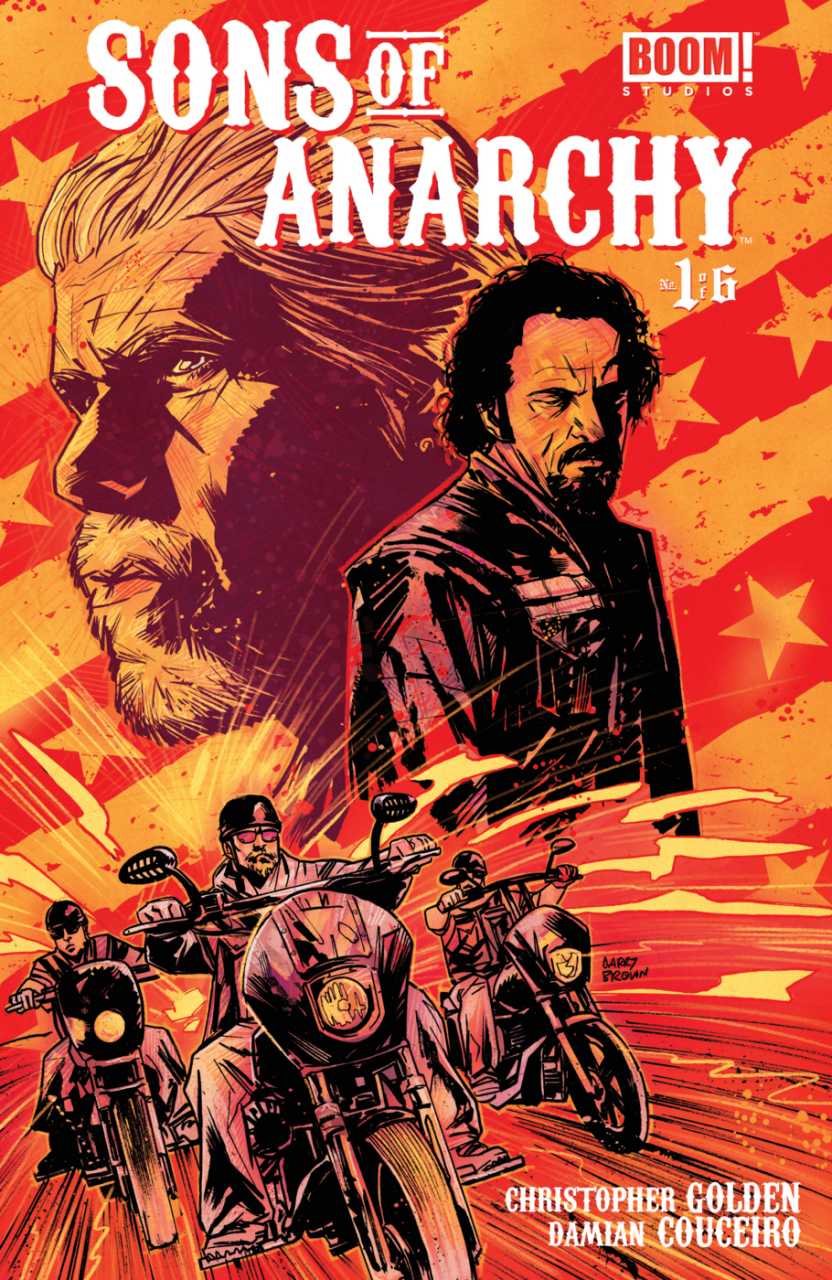 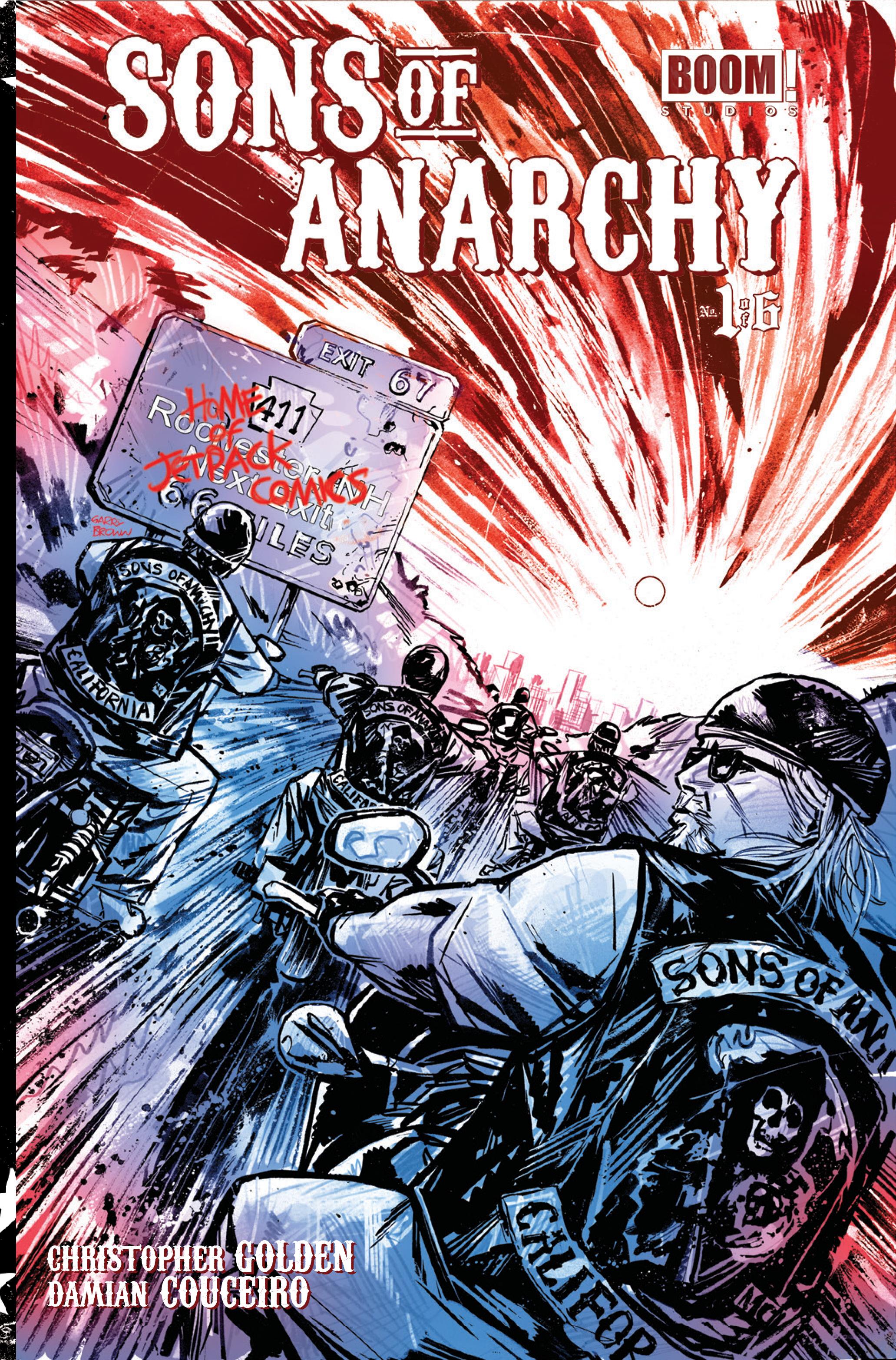 As a huge fan of the television drama Sons of Anarchy, and an avid comic book reader, it was only natural that I was highly anticipating the release of the new Sons of Anarchy mini-series from BOOM! Studios. Featuring an all new original story, it was the best of both worlds for me. Unfortunately, we comic book fans are all too often let down by adaptations. Was that in the cards this time around, or would we be given a story that genuinely felt like it could have been part of the show? Thankfully, fans should rejoice, the mini-series is off to a good start.

Written by Christopher Golden with art by Damian Couceiro, the mini-series shifts the center of the show’s focus from the club’s President, Jax Teller, to the troubled Alex “Tig” Trager. Taking place soon after the death of his daughter Dawn, Tig is spiraling deeper into trouble. His guilt is drowning him and he’s barely treading water. But with Kendra Kozik being introduced, the daughter of late SAMCRO member Herman Kozik, a life jacket has been thrown in Tig’s direction. He might finally have something that will take his mind off the death of his daughter.

Once the introduction of Kendra, her boyfriend and the people he works for is complete readers are dumped into the world of SAMCRO and its members. Viewers of the show will immediately recognize all the players, and for those that have never seen an episode you’ll be glad to know that there are enough small captions that info-dumped character details. They opened the story and made it more accessible for newcomers. In case you’re wondering just what SAMCRO (pronounced like Sam Crow) stands for it’s Sons of Anarchy Motorcycle Club Redwood Original, the original chapter of the Sons of Anarchy motorcycle club, and with over 20 chapters worldwide each has it’s own nickname. For instance there’s a chapter in Belfast, Northern Ireland that’s known as SAMBEL (pronounced like Sam Bell). That’s neither here nor there because for now we’re focusing solely on the members of SAMCRO.

The mini-series takes place between the fifth and sixth seasons of the show and the character relationships and nuances of the issue are predicated on the reader having knowledge of events that are only alluded to, or mentioned in passing. This lays the burden on writer Christopher Golden to familiarize readers with relevant facts and he actually does an admirable job doing so. He puts forth an effort to make sure the reader can follow along with what’s happening.

Introducing Kendra into an established world is interesting, but it creates some pressure on Golden to make her feel like she belongs there. There are five seasons worth of material serving as the foundation for the rest of the characters in the book, so has his work cut out for him when it comes to her ties to the club and its members. Kendra feels like a convenient plot catalyst more than anything else, it’s clear that her fleeing to Charming will bring along the baddies, all of whom seem cut from the same cloth as previous Sons of Anarchy villains.

The art, from Damian Couciero, isn’t bad but there are issues with it. He didn’t do as good of a job as he could have at capturing the likenesses of some the characters. Yet he does do an excellent job capturing things in motion. The bar fight scene in the middle of the issue is paced well, and implied-movement is handled with skill. When Tig swings a pool cue into a body you get a really strong sense of motion and the briskly laid out page comes off as dynamic. His art feels like it belongs in a book like this, it has the rough and tumble look that suits the characters well.

It’s clear that there are challenges ahead for Golden, but that doesn’t mean that he can’t bring a good story to the table. So far he’s set up one, now we just as to see how he executes it. There’s some clunky dialogue, but that also may come from the fact that the characters, and those familiar with them, have an idea of how they’re supposed to sound and react in situations. Perhaps the weakest part of the entire story is the very end, where we get this gem…

You know this works and you know how much it costs. If you have the money, all you have to do is point in the right direction…and we make ghosts.

That’s not the worst dialogue ever written in comics, but it could certainly be better.

Overall, Sons of Anarchy isn’t as bad as I may have let on. It’s actually a pretty good story and I’m looking forward to reading more. Golden and Couciero managed to produce a comic that supplements the show without stepping on its toes. It’s a story that does a good job introducing the club and its members to new readers, and for fans of the show it’s a nice supplement to something you’re already familiar with. I for one look forward in seeing where this goes.