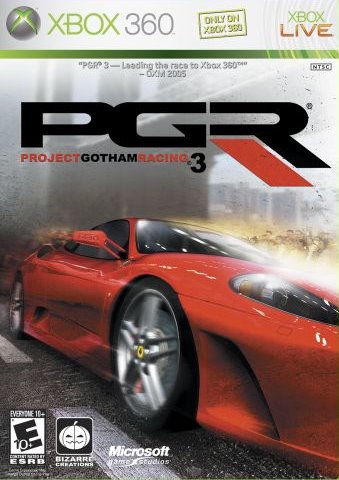 This review was written when Project Gotham Racing 3 was first released. We’re offering up an unedited text version. We’ve prettied up the post a bit, but you can be assured that none of the text was edited from the original post.

WOW, one of the most realistic video games I have ever played. The graphics in this game are simply AMAZING. It’s safe to say that PGR 3 is definitely a next gen console game, not some cheap port.

PGR 3 is about racing, but with the caveat that your performance on the track must also look impressive to the onlookers. Bascially, not only do you have to win races, but you’ll also have to do this while drifting, catching air, and kicking some two-wheel motion. Every move out of the ordinary realm of professional road racing (hitting apexes, not wrecking into other drivers, etc.) will earn you Kudos, which is a fancy way of saying credits. These Kudos go towards raising your ranking and buying more cars.

The game’s set up with a career mode that hands you 100,000 credits and gives you a pretty nice selection of starting cars to choose from. They’re graded on four scales: Acceleration, Top Speed, Braking, and Drift. Drift is going to be important, as it’s the best way to generate the Kudos that the game will reward you on. The game also gives you a garage where you can store up to four cars, and will unlock more garages for you as you fill them up with your favorite cars.

Not all of PGR3’s races have you trying to beat other opponents in a standard setup. Some events will have you trying to build Kudos, either just by driving around or by driving through sets of pylons. Other events require you to pass a certain number of cars; all in all, the player gets a good variety of events here that test specific areas of your driving ability.

While the career mode in PGR3 isn’t terribly deep, the game does include a very nice multiplayer mode that can be done in split-screen mode or online over Xbox Live!. The online play is particularly well-done, as the games are lag free and up to eight people can go at it in a number of race types online. The servers track the best players and does a decent job of matching them up.

A unique online feature of PGR3 is Gotham TV, a feature that includes not only replays of your own races, but also lets you get online and watch races going on with other players. You can go to the Heroes area to see the best-ranked racers go at it, and can change camera settings to any view and watch any racer you want.

The tracks you’ll race in are generally city streets in London, Tokyo, Las Vegas, Nurburging and New York, with many of the unique sights in each city accurately modelled here. Even the spectators look like the real deal.

The cars show a level of detail that’s much more impressive, especially in the correctly-drawn reflections on the shiny exteriors of these cars. But it’s inside the cars that are also wonderful, as one of the camera views gives you an accurately-done view right from the driver’s seat. This is not the easiest of views to employ, as your rearview mirrors aren’t always terribly visible, and your overall field of view is reduced by the car’s frame, hood, and roof. But each car looks different and there’s even a view where you’ll see the hands on the steering wheel.

Sounds in PGR3 are very impressive – like all 360 games, this one supports full 5.1 surround sound. But on top of that, the engines and other effects here were great. The soundtrack is also very eclectic and interesting, with a total of nine genres covered.

Overall, I was very impressed with PGR3. I’d even venture to say that the game is better than Gran Turismo 4.