Earn Future War Cult Reputation by trading in materials such as:

The following looks a the Future War Cult.

In the earliest days of the Last City, various factions vied for the hearts and minds of the masses. The struggle because so strong that an ensuing war developed between the, The following conflicts, known as the Faction Wars, brought the City to its knees. A gathering of Guardians fought to end the conflict and a new peace brought a new order: the City Consensus and the Speaker ruled together, and the surviving great factions worked through civil channels to pursue their agendas.

The Future War Cult was one of these factions. Led by a group called the Inner Circle, members are known for their military prowess as well as their secrecy. They believe they must always be ready for the impending war with the Darkness. In their opinion, preparing for that confrontation should be the sole, driving purpose of the Last City and the Guardians. They are also deeply concerned with fate, and whether or not it is possible to alter history altogether.

While the origins of the Future War Cult are greatly debated, their mark has been found on ancient chambers and encampments throughout the system, dating them back to the late Golden Age. The Future War Cult was founded by Dr. Maya Sundaresh and her team in Lhasa, as a result of their experiments on a Vex-inspired mind-forking device used to look into the future. This device caused its users to become mentally unstable, and they began worshipping the device as a god. The modern FWC recovered the design of the device and rebuilt it in The City. Use of the device was abandoned when most users became insane. Those who did not reported different timelines where the Darkness is victorious or the City has fallen. This device forms the basis of FWC’s beliefs.

Though their secrets are vast, they have proven indispensable in our struggle against the Darkness, earning them power and respect in the City Consensus and among Guardians.

Those who can tolerate Lakshmi’s mocking hints and bloody-minded philosophy find her surprisingly good company. She seems to take genuine joy in her work, as if the secrets she guards have taught her to treasure every moment.*

“There is no future but now. No truth but war.” 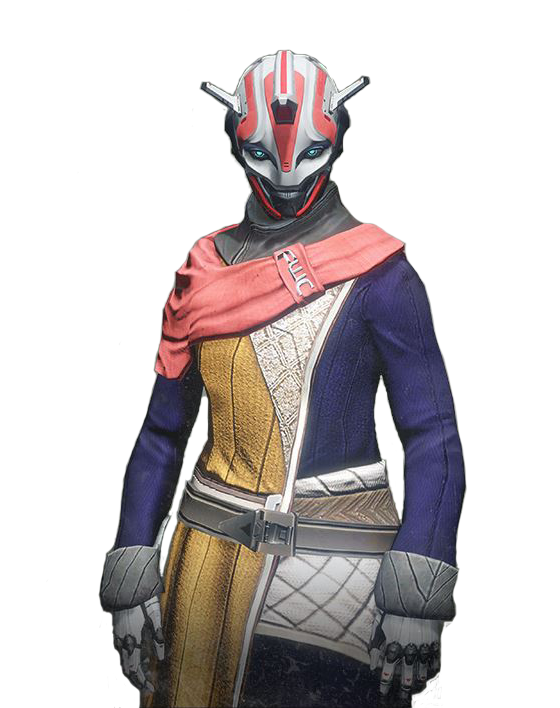 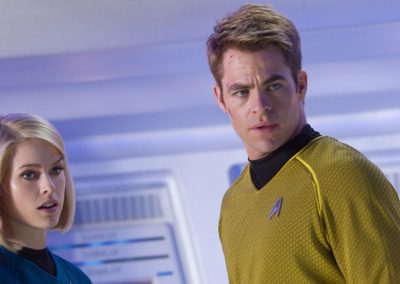 Each armor piece can be purchased from Lakshmi-2 in the Tower for 75 or 120 Legendary Marks upon completion of FWC Rank requirements. Armor purchased from Lakshmi-2 will have a light level of 350. It is also possible to receive a weapon or a piece of armor as a reward for reaching various FWC Ranks. The rewards pieces can have a varying light level.

To view the Future War Cult armor, simply click on the tab that corresponds to the Guardian type. Click on the armors name to visit Bungie’s official site and receive all of the official information on each piece of armor. 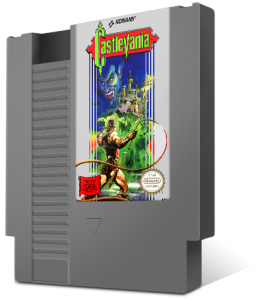 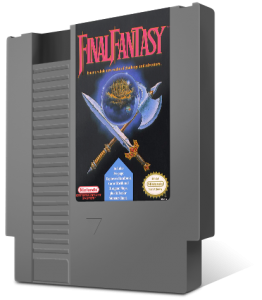 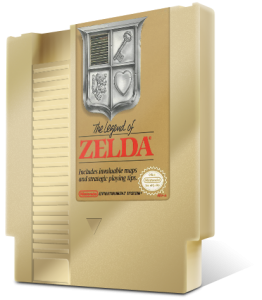 The Bellicose Shell, a level 40 Legendary Ghost shell that can be acquired through a Reward Package from Future War Cult. To learn more click on the name of the shell in the chart below. 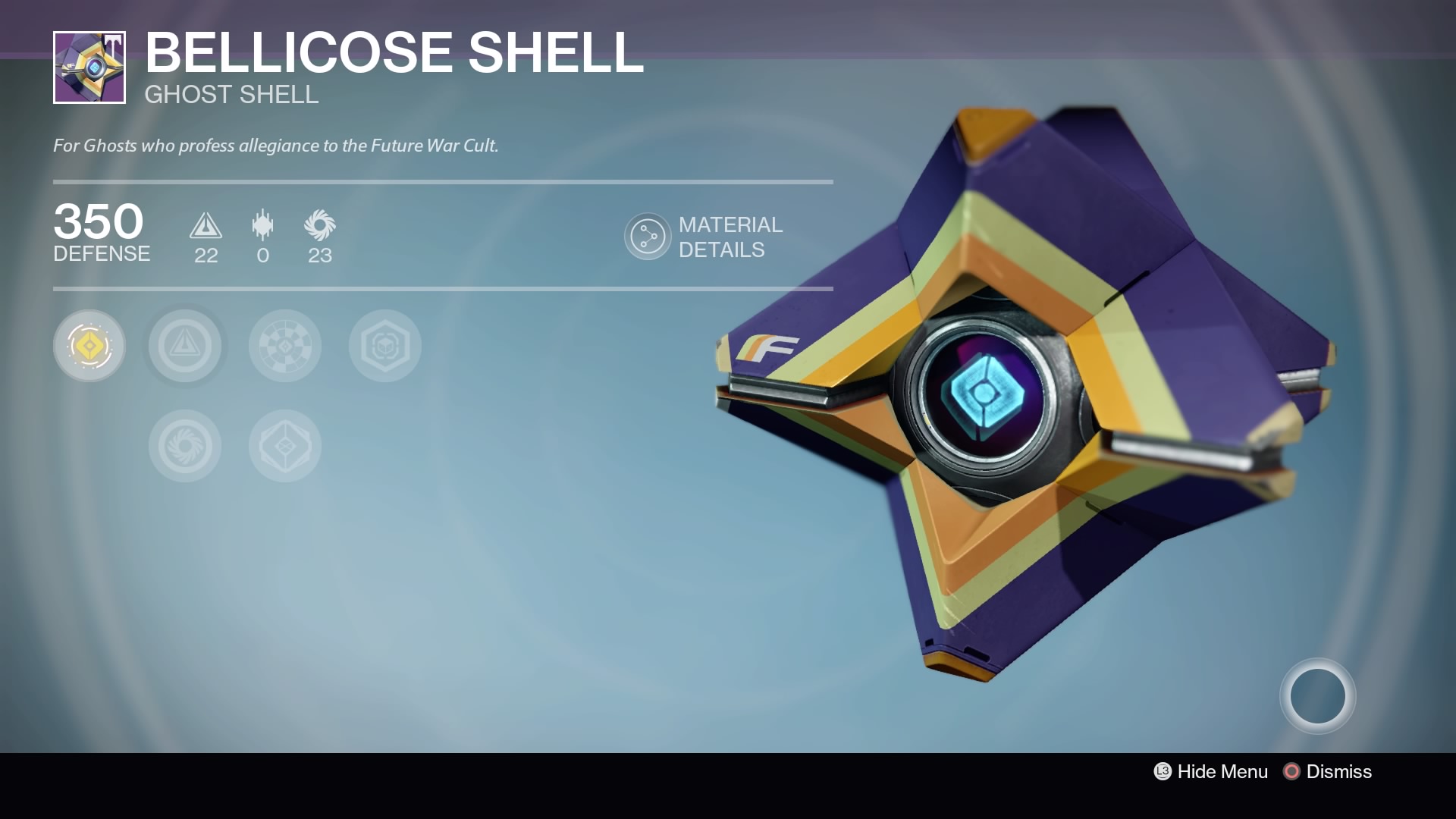 The Eternally Assured Destruction is a Sparrow that can be acquired through a Reward Package from Future War Cult. To learn more click on the name of the Sparrow in the chart below. 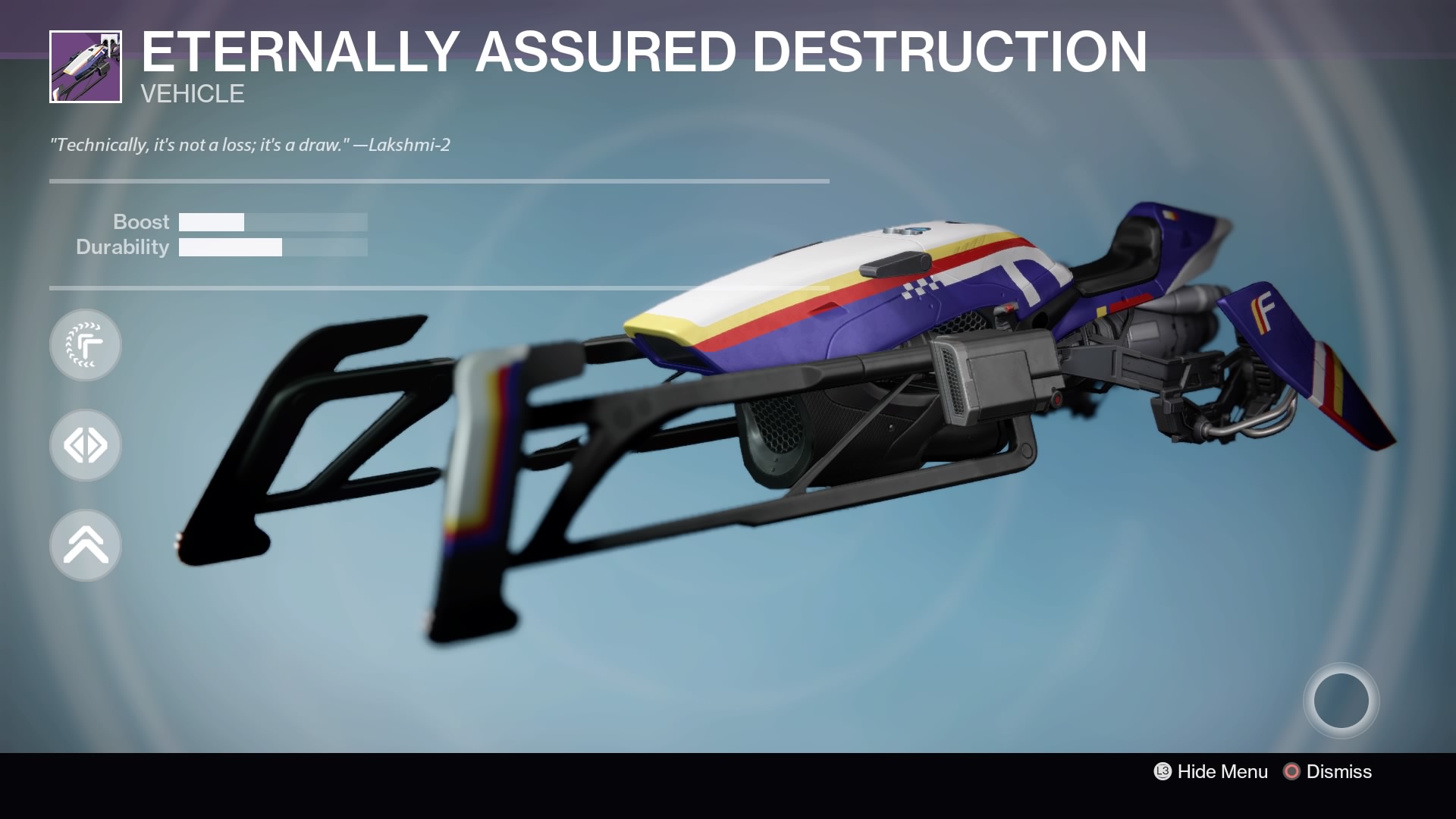 Both ships are Legendary class ships that can be randomly rewarded for increasing your Future War Cult Reputation. 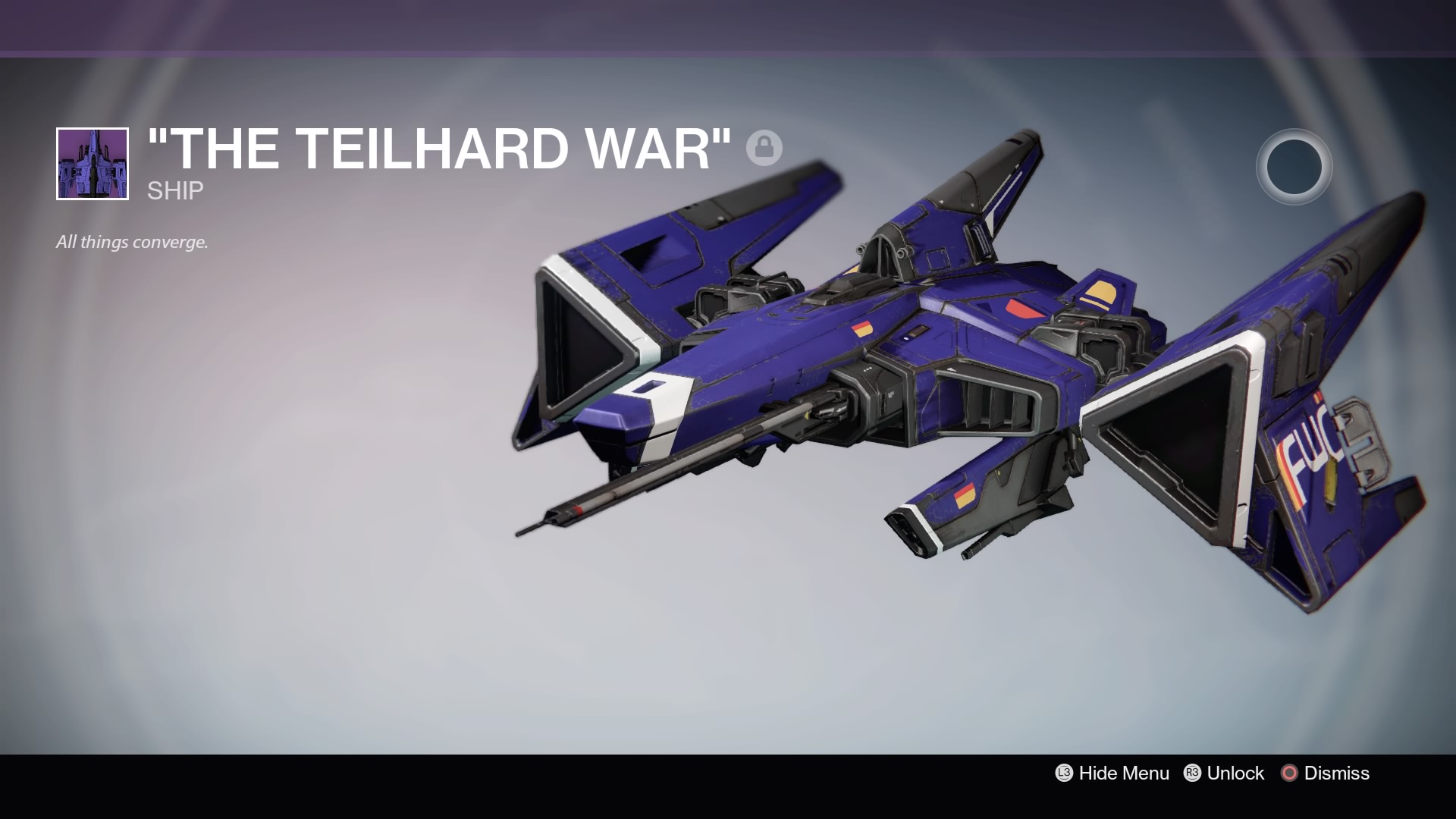 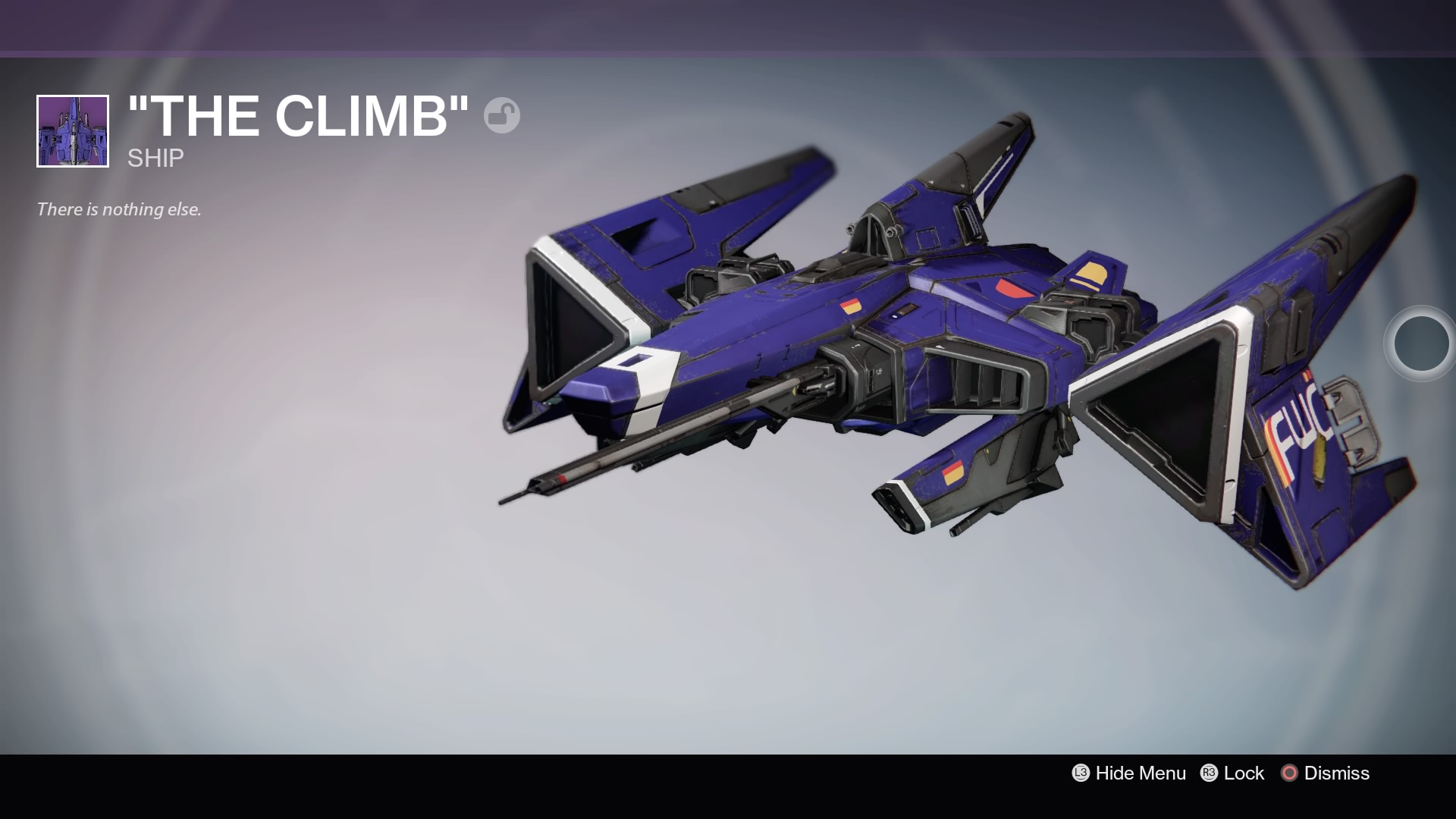 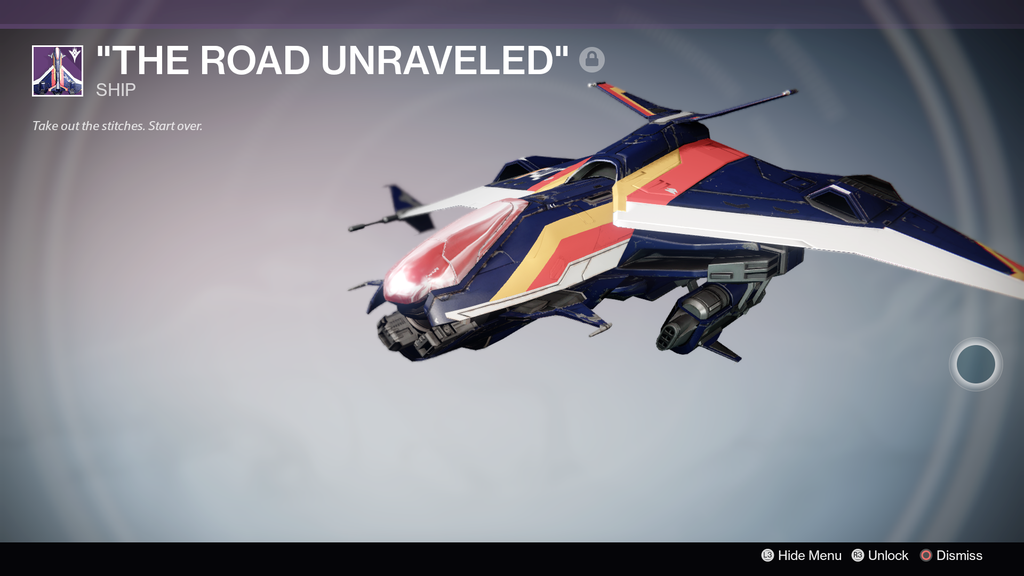 Players are rewarded with Future War Cult emblems as they progress through the Rank reputation. Emblems can randomly drop in rewards packages.

Sigil of the War Cult

Sigil of the War Cult II

Sigil of the Eternal Night

Sigil of the Burning Dawn

Sigil of the Coming War

Shaders are randomly rewarded through drops upon the completion of Future War Cult Ranks.

* taken from the Lakshmi-2 Grimoir, found at bungie.net