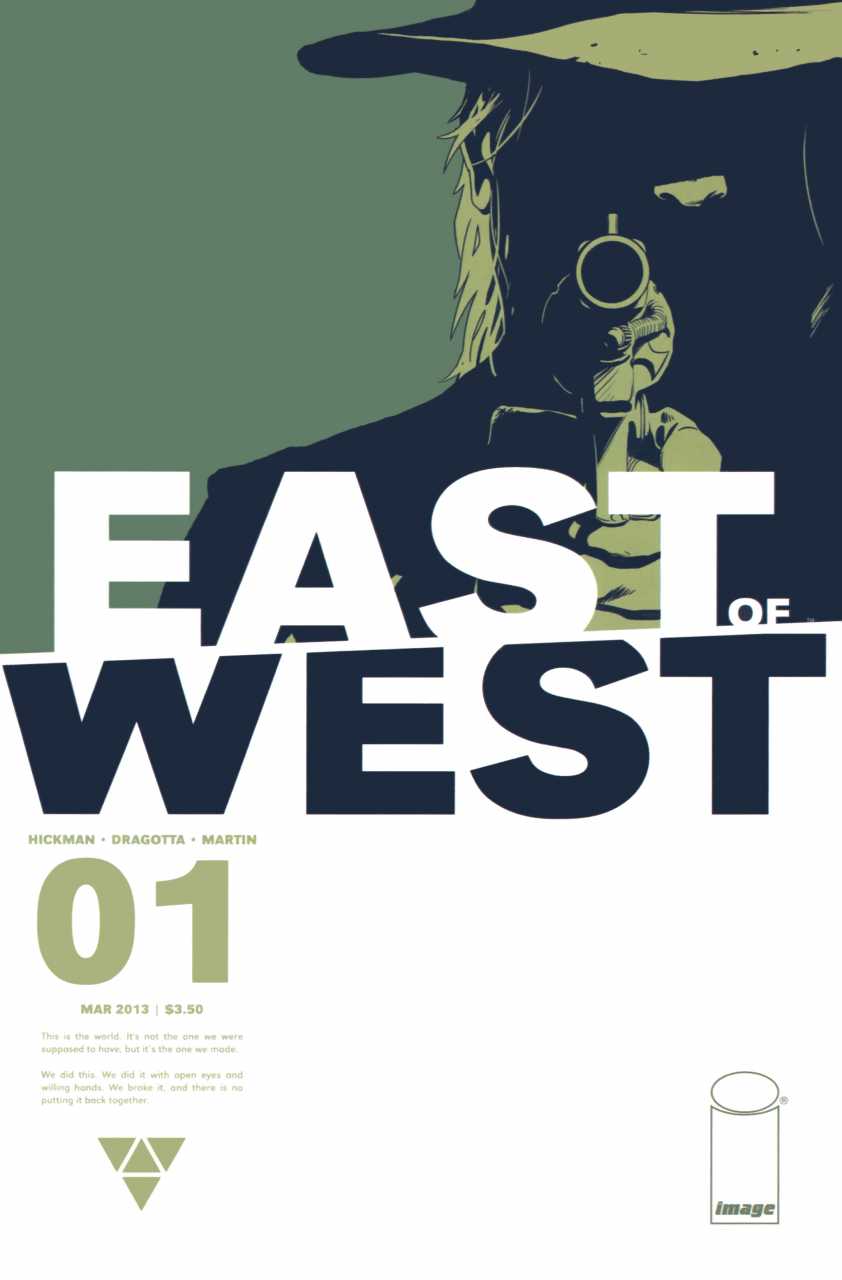 Johnathan Hickman is back with his latest creator owned project for Image Comics, East of West. Set in a dystopian past and future, Hickman is reunited in this wild-western tale with artist Nick Dragotta. To say that East of West is a unique blend of sci-fi and old westerns would be an understatement. A more appropriate description would simply be taking it to the next level.

From the very first page you know you’re reading classic Hickman. Like his previous works of Pax Romana, Red Mass for Mars, and Red Wing readers are presented with a tale that carefully balances back story with current plot arcs. Hickman has managed to create a world that’s managed to hit a wall socially but progress technologically. The evens of the U.S. Civil War reverberate throughout the course of the book, but in ways you’d never imagine. History took a turn in a new direction, and its impact has created a continent divided by fear, hate and diversity. He goes into great detail explaining the why and the how. Once this world has been set up, he pushes forward full steam ahead, which in typical Hickman fashion is both thrilling and confusing at the same time.

The story centers around the rebirth of the Four Horsemen of the Apocalypse. But there’s a problem when Death has not been reborn like the others. Introduced as three children, the Horsemen set about looking for their old friend bringing death and devastation to all they encounter. Fast forward to a new America, one that’s made up of many nations instead of one, the story shifts gears to Death and the revenge he’s seeking. That remains a mystery for now, but it’s clear that East of West has a clear direction that it will take, and one that will leave behind a body count to make any horseman of the Apocalypse proud.

If there’s one thing you can be sure of when reading a Hickman book is that you’ll end the book wondering just what happened, but left wanting so much more. Hickman is a master of not telling us anything but keeping us interested. We see three of the four horsemen as children, but Death is running around as an adult. Why? How? All questions that will slowly reveal themselves. For new readers of Hickman’s work it might seem a little jarring how little is actually shared, but stick with it. The payoff is always worth it.

Joining Hickman on the book, and handling the art chores, is his FF partner Nick Dragotta, who’s work is top notch and fits in so well with the story. The contrast between the desert and the massive White Tower illustrates how Dragotta perfectly uses scope and breadth, knowing when less is more.  His style fits appropriately into a story taking place in a dystopian western, with that splash of modern technology. Not enough can be said on how well Dragotta’s art enhances the story.

East of West is Hickman’s best work to date, creating a new world in which readers are left wanting more.