It’s been rumored about, but now it’s finally available for players to claim, the near mythical Sleeper Simulant Fusion Rifle. Players lucky enough to have brought enough legendary fusion rifle relics, DVALIN, to the Gunsmith will be able to participate in a story mission called “The First Firewall”, which can be found in the Cosmodrome on Earth. The mission takes you back to Rasputin’s bunker, where you will need to scan a console to start the action.

It’s recommended to complete this mission with at least one other person in your fireteam, using an Arc weapon will also help immensely. Most of all you will want to pay attention to the placement of the Hive and Taken Knights when they spawn in each round, this will help you decode a riddle you will obtain when you complete the mission.

Click on the image to the right to see where “The First Firewall” is found on the Cosmodrome map! 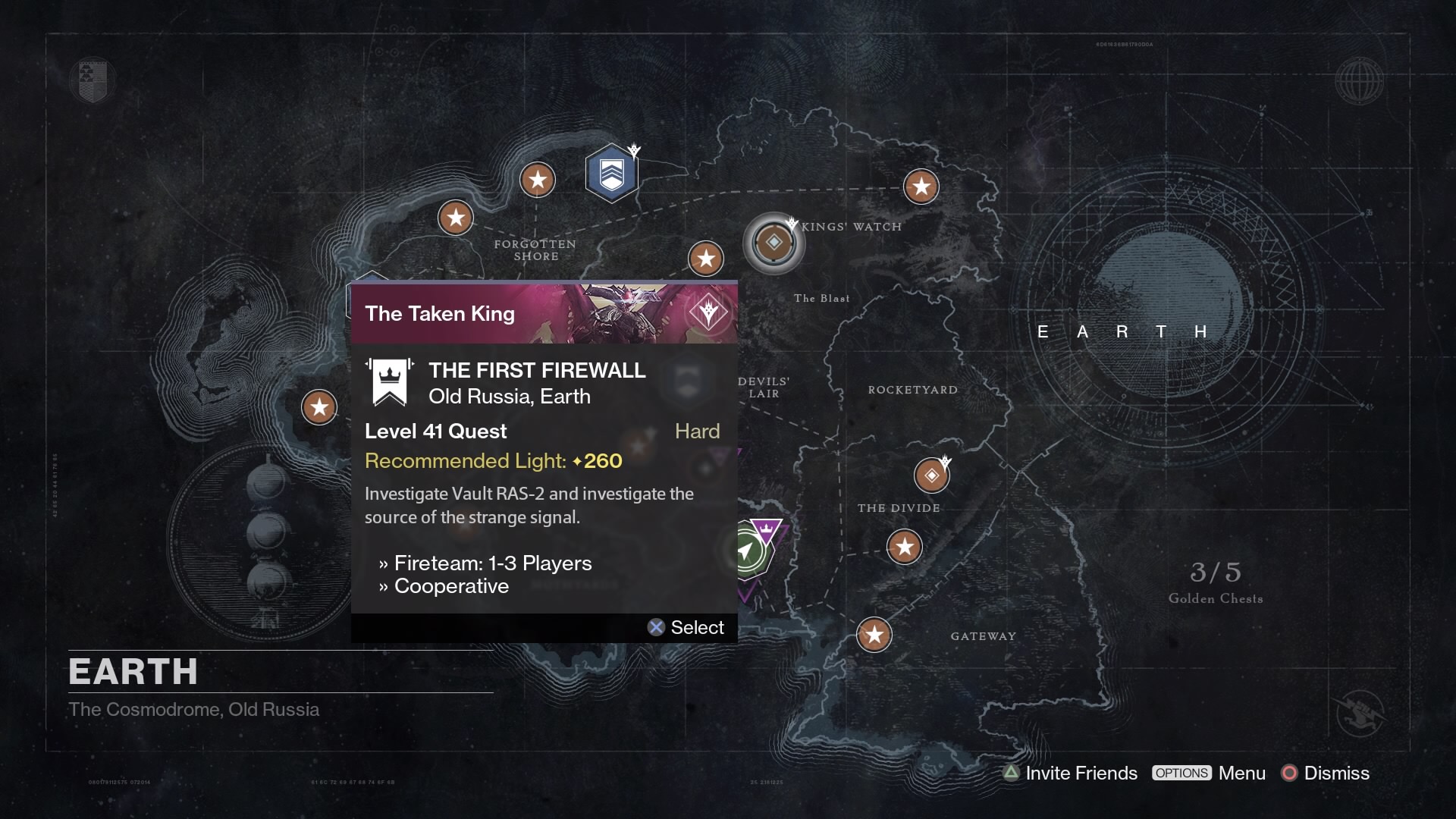 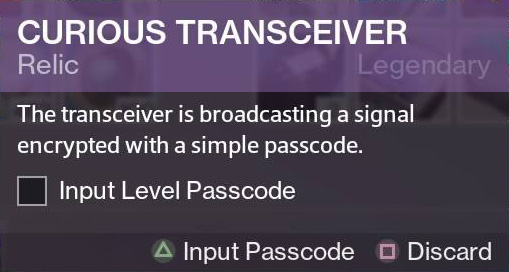 Again, pay attention to the pattern the Hive and Taken Knights spawn in, it’s going to be important in a little bit. Once you’ve beaten four waves of Knights you’ll come across some more, but this time they’ll be joined by a big Taken boss. Take him down to end the mission and once complete you’ll receive a new object called the Curious Transceiver.

Head on over to your inventory and in the Mission area you’ll see the “Curious Transceiver”, inspect it and it will say that you need to “Input Level Passcode”. This is the puzzle portion, and relates back to paying attention on how the Hive and Taken Knights spawned each round. If you didn’t take notice or just want to take the easy way, read on….

Remember those waves of Hive and Taken knights? There was a pattern to how they spawned each round. Going from left to right, place a mark in the top box for each Hive Knight and the bottom box for each Taken Knight. You’ll have to do this four times, since there were four waves. Once you’ve successfully input the correct code it will unlock another until all 4 are complete. Once you’ve completed this, you’ll activate the transceiver, and it’ll give you a new mission to complete on Earth, “Shadow Call”.

Take a look at the images below to see how to input the codes. 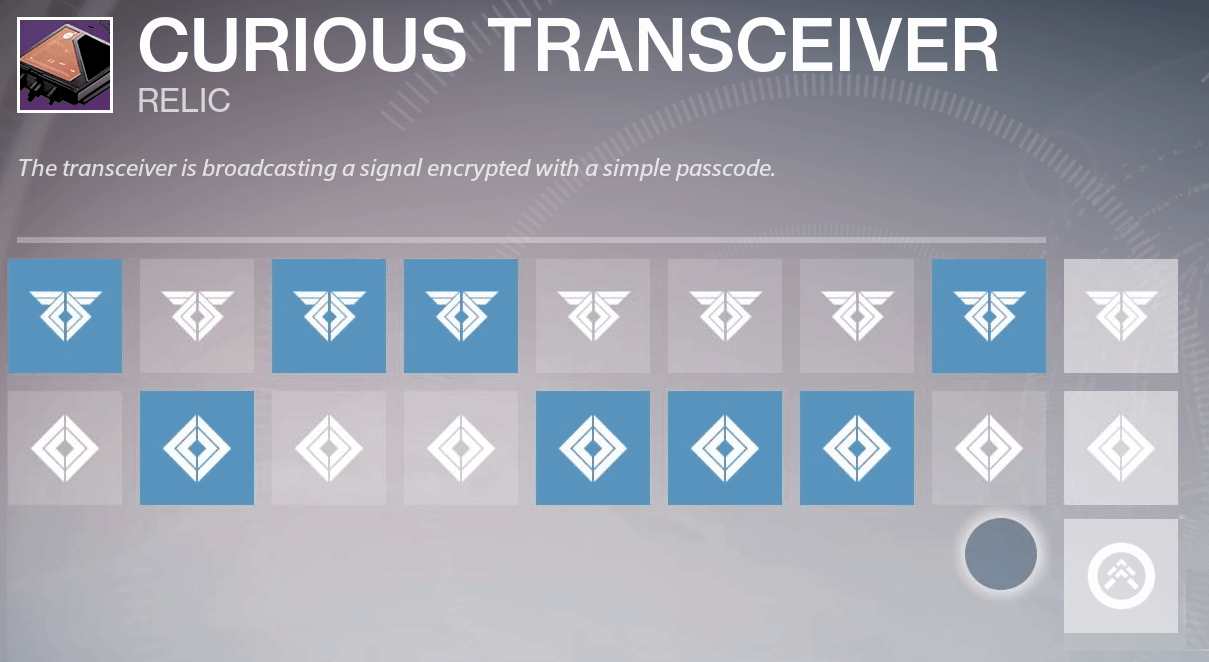 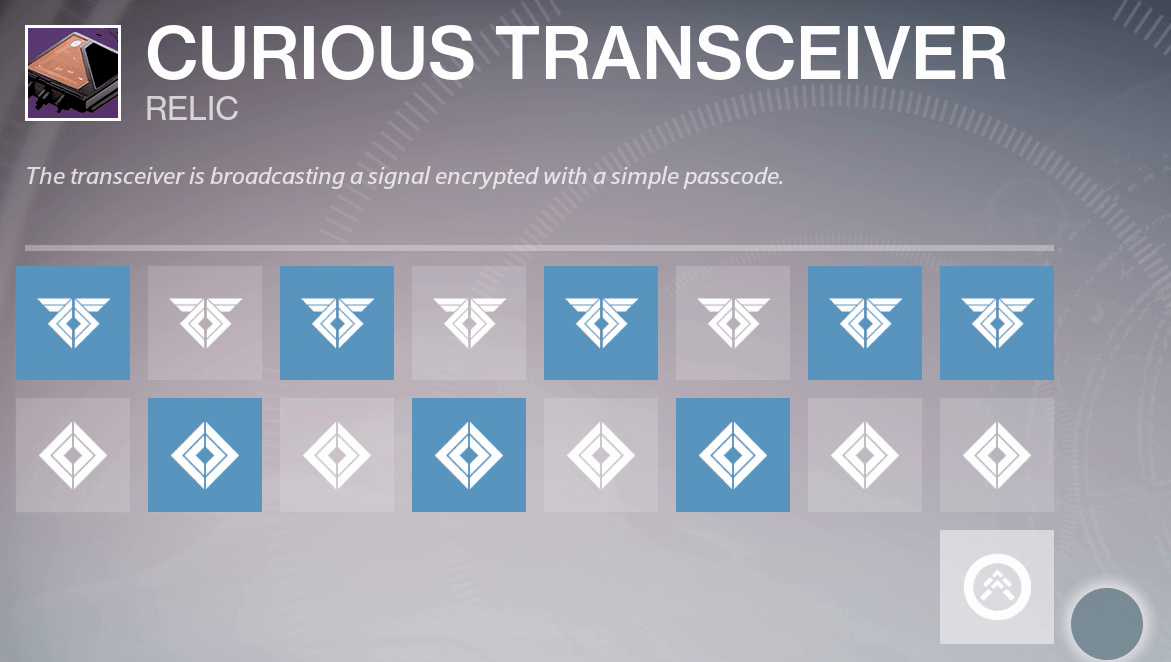 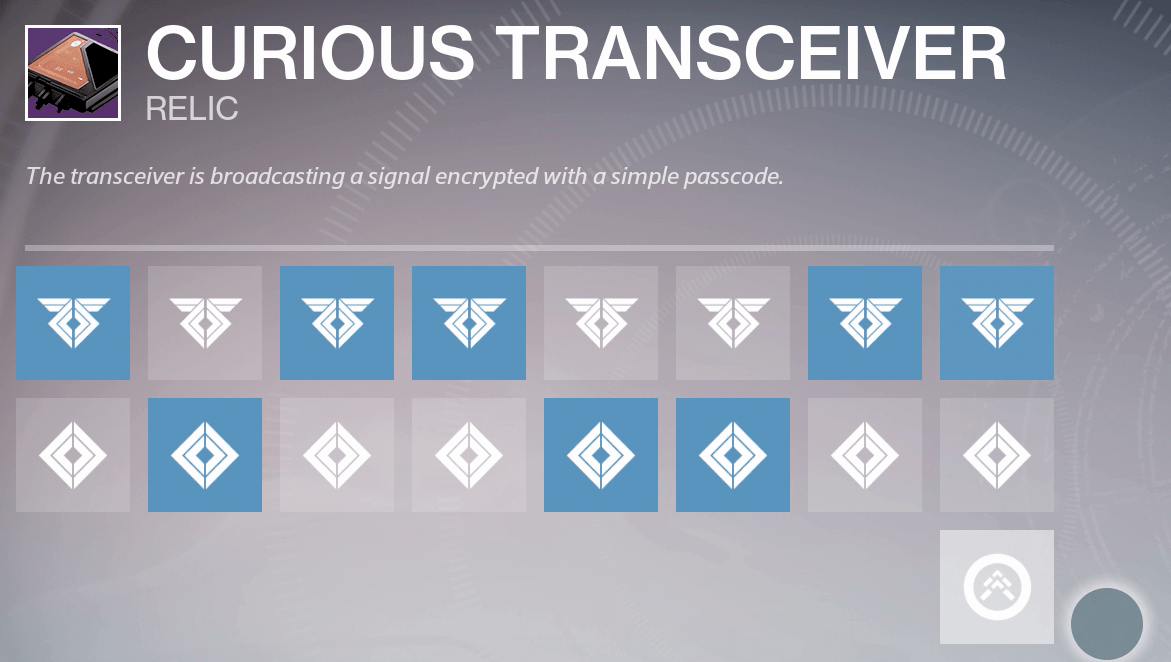 The next mission takes you back to the Cosmodrome where you will have to head back up the Devil’s Tower, this is where Cayde keeps his hidden stash. It’s important to note that you cannot do this mission with a fire team, it must be performed solo!

You’ll start at the broken bridge, and have 4 minutes to make it to the top, and yes there will be a timer visible so don’t let it distract you. There will be Taken along the way, but don’t stop and fight, just push through. At the top, you’ll fight off 3 Ultra Wizards. If you get down to 30 seconds left in the mission, a Shadow of Oryx will spawn and you’ll need to beat him as well. So make sure you complete it before that! Once you’ve completed the mission you’ll be rewarded with an Exotic item, the “Ikelos Fusion Core”. 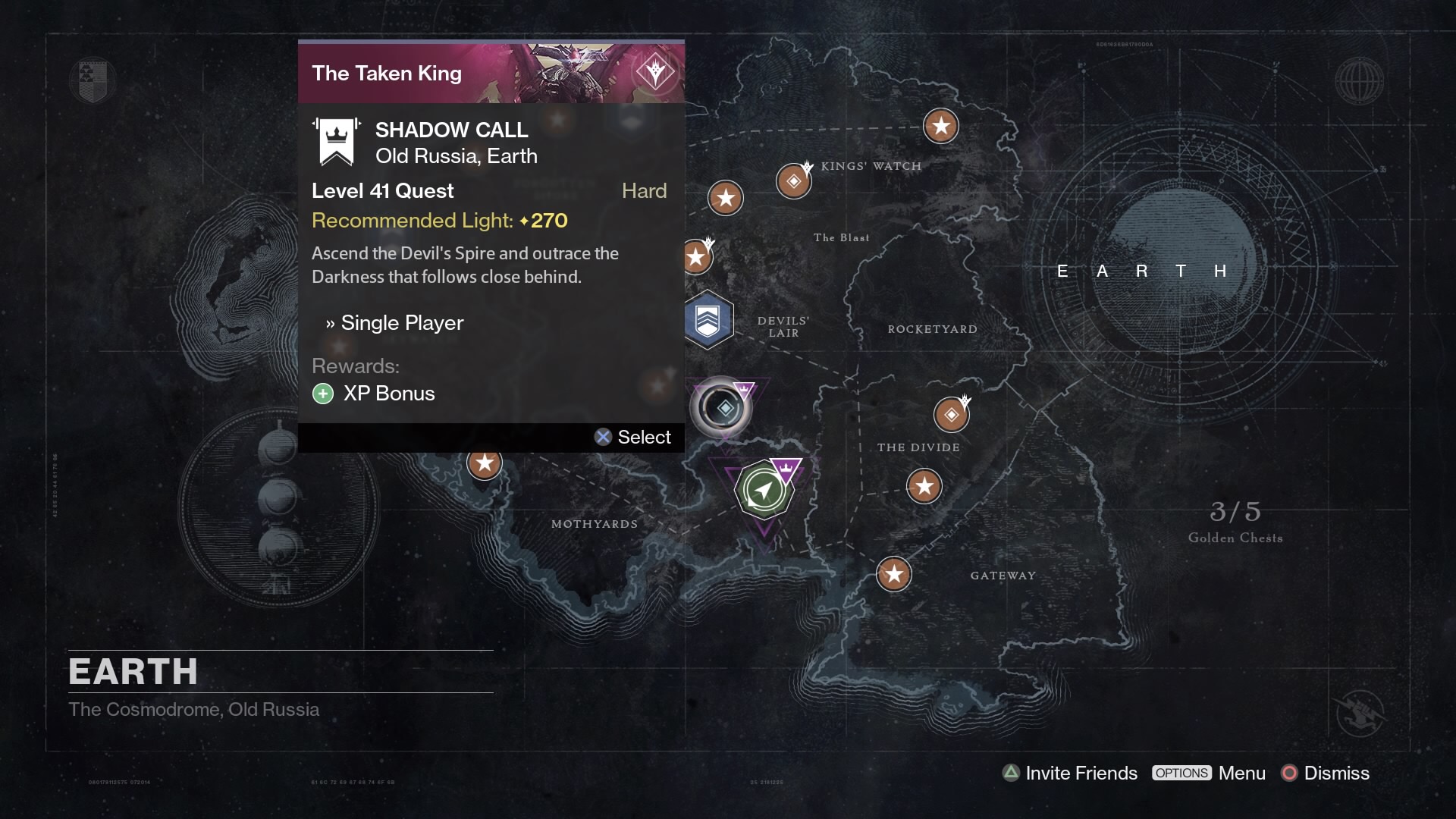 “Looks like the core’s missing five key components. We’ll have to track them down in order to activate the nodes and restart the core.” – Ghost

Ionized Shell Harmonics – Complete “The Archive” mission on Venus on any difficulty.

Plasma Confinement Control Module 1 – Defend the Warsat during a public event on Earth.

Plasma Confinement Control Module 2 – Defend the Warsat during a public event on the Moon.

Plasma Confinement Control Module 3 – Defend the Warsat during a public event on Mars.

Don’t be frustrated by the Public Events, there’s a nifty website out there that will let you track exactly when the Warsat events spawn, head on over to the public event tracker.

Once you’ve found the five times and completed the steps you’ll have to assemble the fusion core and hand it to the Gunsmith. Come back a day later and he will then give you a quest called “The Sleeper Stirs”. This Exotic quest will require you to complete a special version of the “Fallen S.A.B.E.R.” strike. Beware, this could be a tough one. The recommended Light level is 280 and the minions spawn at level 42 minions. Luckily, matchmaking is available for this so just get a good fireteam together and you should be able to handle it easily. The start of the mission, defending the Warsat, might be the most difficult part as Fallen dropships are firing on you. Either seek cover or have a Defender Titan on the team throw use a Ward of Dawn bubble. 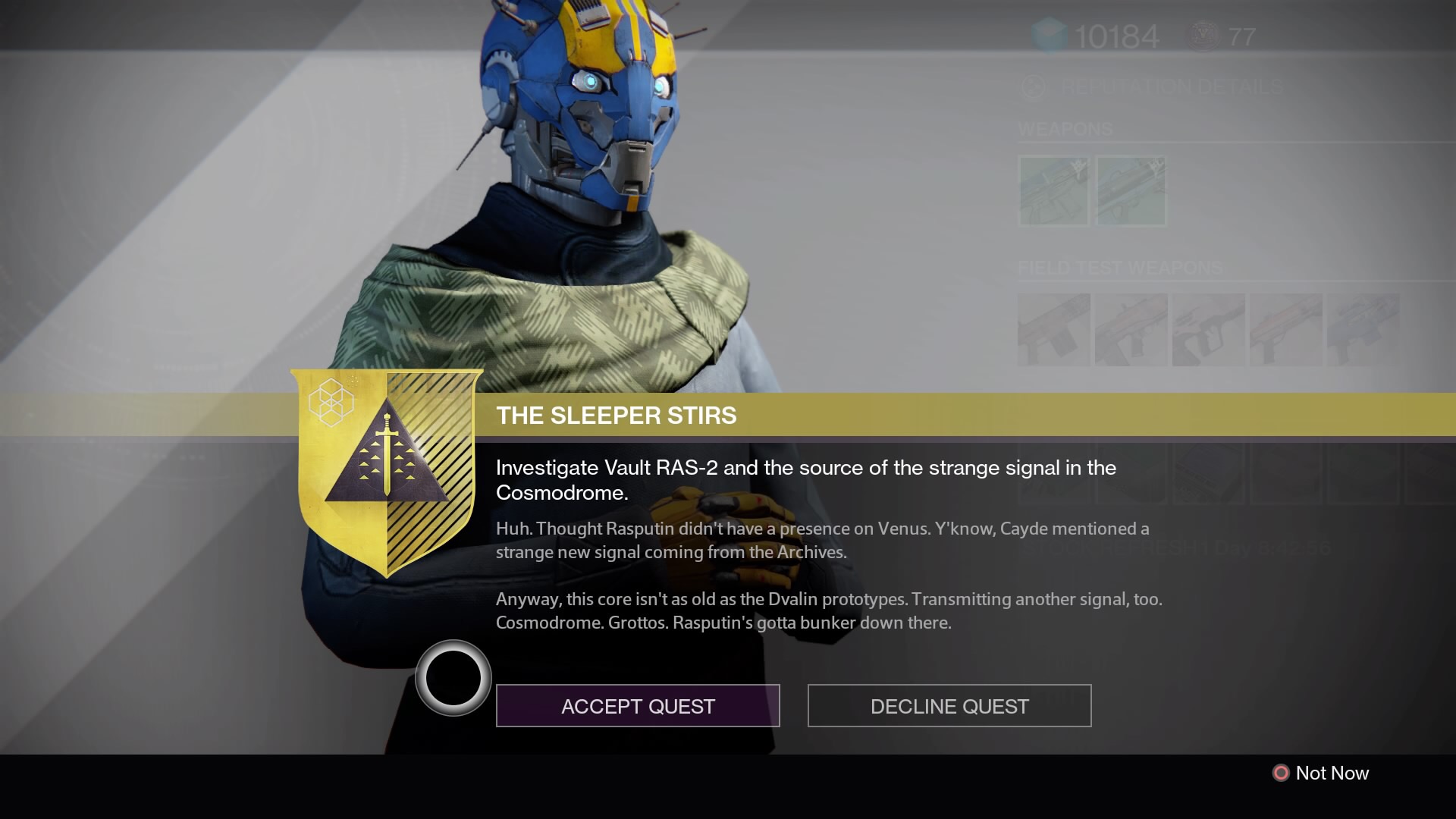 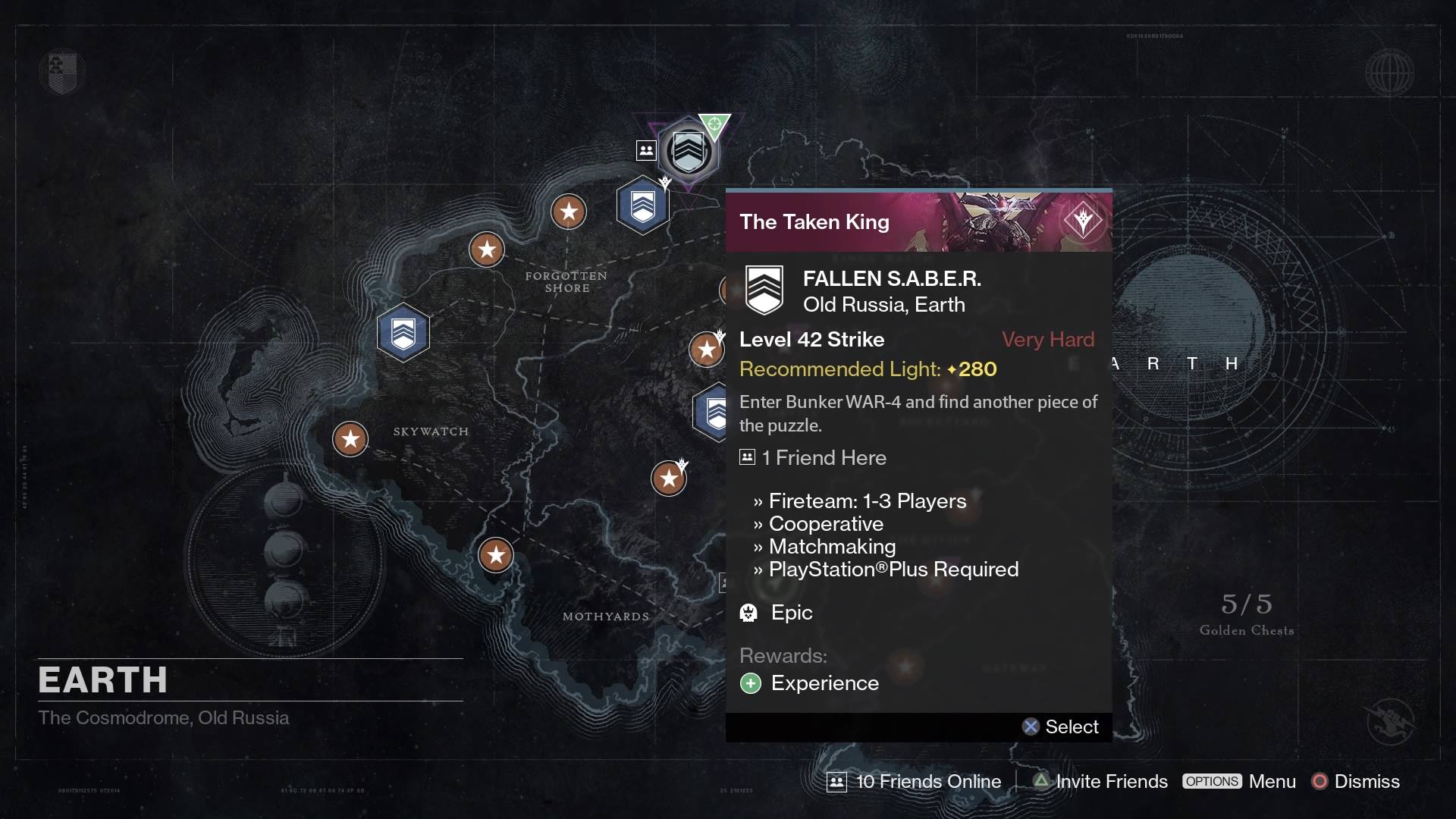 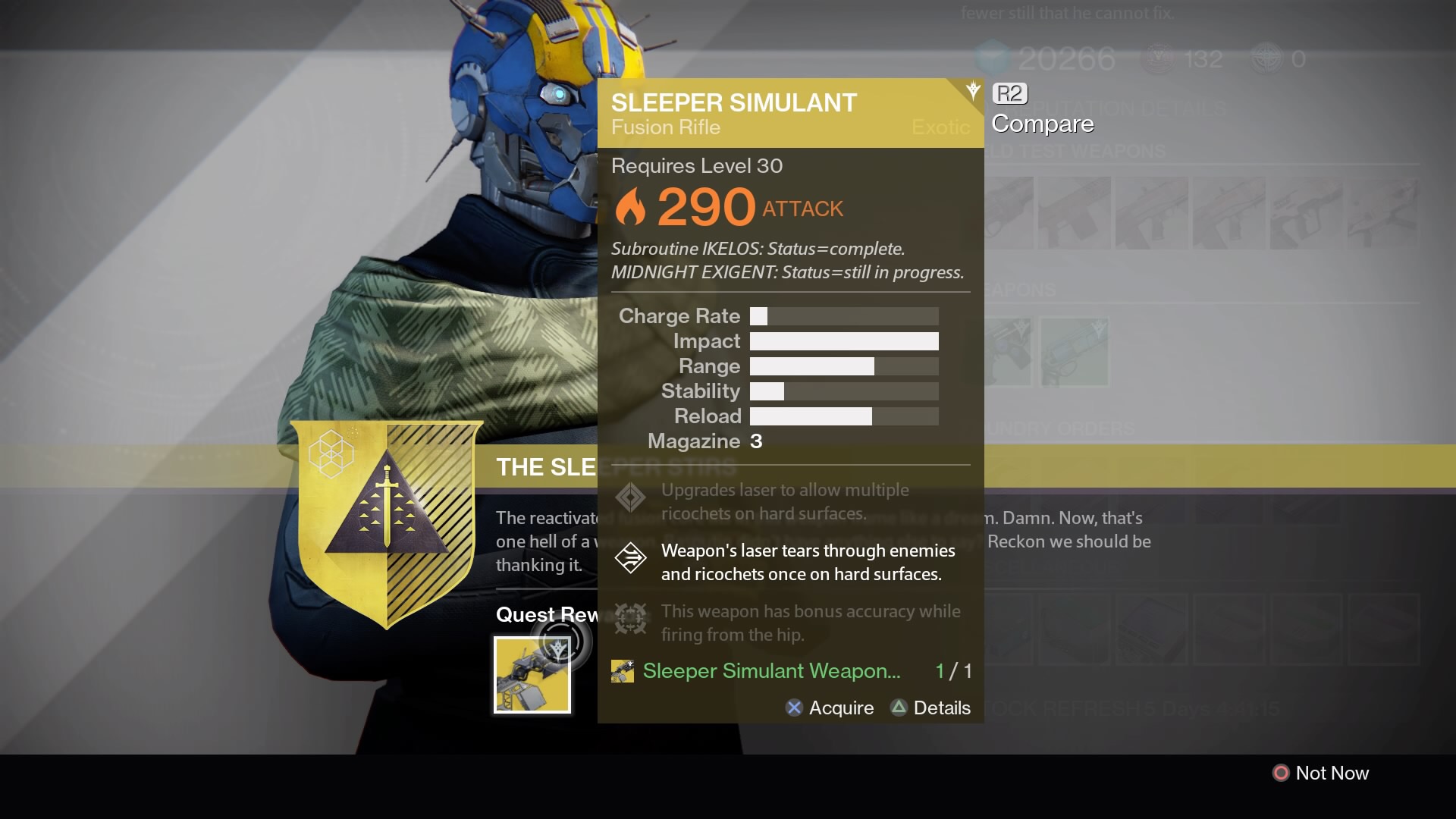 Take a look at the Sleeper Simulant and its perks!