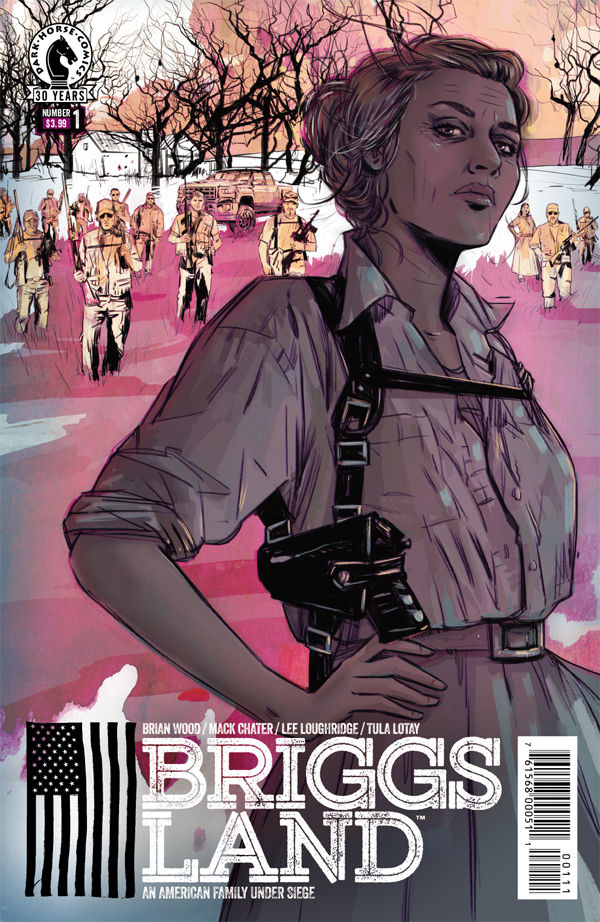 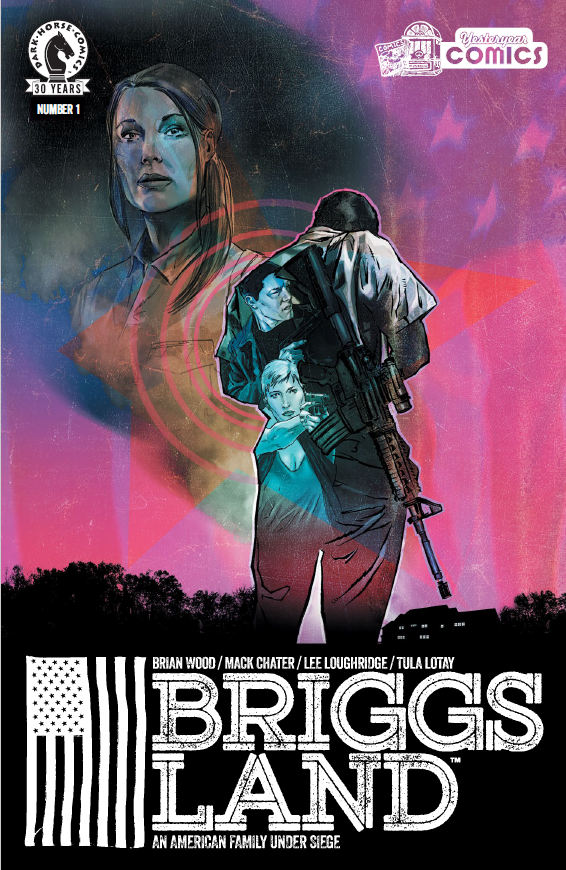 Briggs Land is about family of sovereign citizens, one that have won their battle against the government, but are now faced in a battle amongst themselves. They’re unified against their fight against the United States, but the unity within the family has been shattered and putting it back together could be the most difficult thing they’ve ever faced.

If there’s one thing that stands out with Wood’s writing, it’s the character development. We’re often treated to some extremely well fleshed out characters, and it makes the story all the more enjoyable. Briggs Land is no different. Right from the start, where we meet the family patriarch Jim and matriarch Grace, we’re thrown into this internal struggle for power. We’re faced with a strong willed woman who is not afraid to take things into a direction she feels is best for the family, even if that means cutting off her husband of 34 years.

The story starts in a federal supermax prison in Upstate New York, a prison Wood has proclaimed is modeled after Gowanda Correctional. Here we meet Jim and Grace Briggs, the head of the Briggs family and leaders of Briggs Land. We learn that Jim is serving a sentence for the attempted murder of the President of the United States. Grace has been traveling three hours each way, twice a week , to see her husband. It’s apparent that Jim is still running the family, in spite of him being incarcerated. But this is where it gets interesting. Grace has declared that she’s no longer going to make the trips because she’s taking over the family. Despite her husbands protests, Grace tells him why she’s doing it and how the future will be for the Briggs family. You can be sure that things aren’t going to go well.

If you’ve ever read any of Brian Wood’s work you know that he’s not one to shy away from the social issues that are prevalent in our society, or even in the past. He’s never been afraid to tackle issue that people don’t like to talk about, he brings it to the forefront of his stories and will smack you in the face with it. And there’s absolutely nothing wrong in doing that, because it makes the story all the better. His work makes people think about what we’re doing wrong and how we can fix it. It’s an approach that makes his work stand out. Wood’s newest book, Briggs Land, follows in the same vein. Given the current political climate and the rise in anti-government sentiment that has seen a rise in popularity the story of Briggs Land is one that can be happening at this very moment. 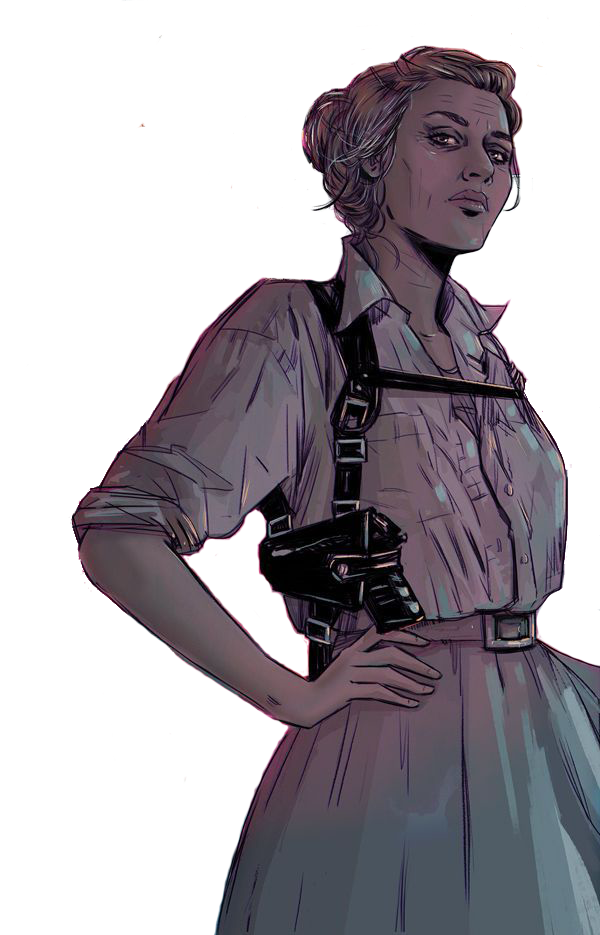 After taking the reigns of the family meet Grace’s youngest son Isaac. The only son the government has any records on, because he decided to leave the family for a bit and join the US Army. Having served overseas the past couple years Isaac has returned home to the newly structured family. He supports his mothers decision and seems to be the only family member she can trust. We’re also introduced to Grace’s eldest son Caleb, a died in the wool white supremacist with Nazi tattoos. He’s definitely his fathers son and is not happy with the coup Grace has performed. Caleb is also the families money launderer, and it will be interesting to see how this plays out in future issues.

Lastly we’re introduced to the middle son, Noah. A character that looks straight out of Sons of Anarchy, he reminds me of Jax, someone who’s strong willed and will do whatever he believes is best for him. Grace is trying to keep the family together, but there’s an element that wants to see her taken down. This creates a lot of tension within the family and it comes to a head at the end of the issue.

Then there’s Briggs Land, the massive compound that located in Northern New York, near the borders of Vermont and Canada. Spanning over a hundred square miles of land, Briggs Land is home to sovereign citizens who have cut all ties with the government. The land itself is a character within the book since it’s the reason the family has survived over 30 years. It’s this land that allows them to live the way they want, it allows them to cut off ties to society. Yet it’s also the reason that there’s a split in the family. Grace believes that the family, and Briggs Land, should be taken in a different direction than Jim’s vision. As often is the case, when something gets too big it becomes difficult to control. Briggs Land has taken in hundreds of people, and many of them have their own agendas. Trying to maintain control over a large compound, and to make everyone happy is difficult. It’s especially difficult when someone decides to shake the very foundation everything was laid upon.

This is why Briggs Land is so compelling. It’s telling the story of a people that don’t trust the government and now many don’t trust each other. The possibilities are endless. Wood has created something that resonates in todays society.

Who are Sovereign Citizens?

The sovereign citizen movement is a loose grouping of American litigants, commentators, tax protesters, and financial-scheme promoters. Self-described sovereign citizens take the position that they are answerable only to their particular interpretation of the common law and are not subject to any statutes or proceedings at the federal, state, or municipal levels; that they do not recognize United States currency; or that they are “free of any legal constraints.” They especially reject most forms of taxation as illegitimate. Participants in the movement argue this concept in opposition to “federal citizens,” who, they say, have unknowingly forfeited their rights by accepting some aspect of federal law.

The Federal Bureau of Investigation (FBI) classifies some sovereign citizens as domestic terrorists.

Behind every good series lies the creative team. Wood and artist Mark Chater work well together bringing Briggs Land to life. From the way wood uses the dialogue between two FBI agents as a way of introducing characters and familial situations to the way the characters interactions illustrate their development. Wood has managed to flesh out a number of characters within the first 30 pages of the story. We get a sense of the wariness of Grace, and the hatred of Caleb. We can see the bond between Grace and Isaac and how much they mean to each other. There is a lot of story that’s covered in this first issue, and it does an excellent job of setting up the story for future issues.

Chater’s artwork gives a sense of realism to the characters and their surroundings. Jim and Grace have the extra lines on their faces to show their age and the pressure that has been placed on them through the years. Their youngest Isaac looks like the fresh faced kid who’s been off to war, but comes home with the same baby face but a different look in his eyes. The oldest, Caleb, looks like he’s starting to age a bit, but he’s still filled with the hate and rage that has possessed him his entire life. The middle, Noah, looks like he’s stepped out of Sons of Anarchy, which is not a bad thing. Each son has their own distinctive look that really separates them from each other and embodies the the of person they are.

Tula Lotay is doing the covers for the series, and if you’ve read Wood’s previous work Rebels, you’ll recognizer her artwork. Her cover for this issue came across as very powerful and made Grace the focus. It sent a message that she’s a woman that should be trifled with.

Perhaps the only issue I had was with the coloring, there was a bit too much brown/yellow/green going on for my tastes. There were a few panels where the use of multiple colors could have broken up the panel a little more and not have it blend in so much. Overall though there isn’t much else that can be said for the colors, just maybe expand the palette a little bit in future issues. By no means was this a deal breaker, nor did it impact my impression of the book. Perhaps it’s just a little nitpicking on my end.

Overall, the creative team did an excellent job bringing the book to life. The characters felt real and living in Upstate New York, the setting looked like something I see when driving around. It also helps that one panel early in the book shows highway signs for towns literally within minutes away.

With the success of The Walking Dead and Preacher, AMC has decided to take a gamble on a Briggs Land series. What makes it remarkable is that they agreed to a development deal before the first issue was ever released. Briggs Land is already in development as a TV series for the popular cable network. Given the current political climate, and the rise of the Sovereign Citizen movement, bringing Briggs Land to the small screen seems like a smart choice.

Wood wrote the pilot script and will be having a hands on approach to the series as a writer and executive producer. AMC is known for some high quality production and allowing the creators a great amount of leeway in telling their story. Bringing Briggs Land to life on the small screen will allow fans of Wood to experience his work in new ways and hopefully drive up even more interest into his work. Hopefully it could help push the previously announced DMZ series at Syfy into production.

One thing is for certain, if the show is anything like the comic they’re going to have a hit on their hands.

So how is Briggs Land? It’s a well crafted story with a lot of potential with a creative team that brings the story to life. To put it bluntly, it’s an excellent start to what looks like will be another hit from Brian Wood. Mark Chater’s artwork compliments Wood’s storytelling, making it all the more enjoyable. If you’re a fan of Wood’s previous works then I would highly recommend this. If you enjoy realistic stories that take a look at issues that we face today, then this is definitely your cup of tea. Briggs Land has earned the praise it’s receiving, and hopefully we’ll get to see it on the small screen sooner rather than later.